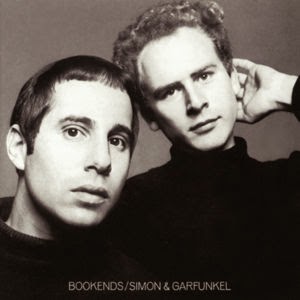 Looking back, Simon & Garfunkel were only a successful duo for six years. Its first hit was in 1965, the last one in 1970. At the top of their fame Paul Simon and Art Garfunkel decided that they had enough of each other and went their own way. Paul to go on and release many a successful album and Art decided to act and release solo albums as well. All that was in the future when they released Bookends in 1968, only 10 weeks after the soundtrack album 'The graduate'. Bookends was the duo's best selling album until then.

To me Simon & Garfunkel has always been a hitsong duo. The only album I had ever listened to was 'Bridge over troubled water' and by then we are in the mid 1980s. It did not invite me to go on and explore the older albums. I stuck with my, albeit very badly pressed copy of 'Greatest hits' and "Concert in Central Park'. And was in De Kuip in the spring of 1982 for a great concert.

Having never heard Bookends before, I'm surprised from the very first notes. If I set the two 'Bookends' intro and outro apart that start and end side one on the original LP, 'Save the life of my child' is anything but what I expected from a Simon & Garfunkel song. Psychedelic is a good description. Estranging elements are an important part of this song. It starts with a fuzzed electric guitar. With some very modern sounding effects in the singing and rhythm. Where the psychedelia sounds very much late 1967/early 1968, making this song extremely interesting to listen to. The darker voiced, totally unS&G,saying "blah blah blah" is even extremely funny.

'America' is a song I had on a cassette tape in a Yes version from a radio show in the mid-70s. This is the first time I'm hearing the original. This beautiful, dreamy song is not only an example of the craftsmanship of Paul Simon as a composer, but also a peak of experimentation. Again a song that I would never have associated with S&G. Except for a small part, it's even not sung in a Simon & Garfunkel way. These trinkling notes, by different instruments as well, going in all sorts of directions, only faintly belonging to the main melody of the song and still they completely fit, making 'America' amazing, exceptional and beautiful all in one. Playful fantasy I'd call it. 'Overs' is the sort of song that Paul Simon has forever been making since. Jazzy, far away from a pop song. A sort of song he no longer needed Art Garfunkel for, I guess. He has a solo part, but not in what the two were extremely good at: harmonising. Taking it all in, Bookends could have been Paul Simon's first solo album.

'Voices of old people' are just that. Why would anyone want to have this on an album? And it's on an album of one of folk's best duos ever! A duo that with Bookends moved way beyond folk. There's some pop, but definitely also rock elements and jazzy stuff, as already mentioned. 'Hazy shade of winter' is another song I knew as a cover. By The Bangles. I'm surprised how hard S&G rock here. It's not a distorted riff that is played here, but the main riffs is a real rock riff no matter how it's played.

Side one ('Hazy shade of winter' is on side two) ends with 'Old friends'. A beautiful small song that gets a 'She's leaving home' kind of treatment. Loads of violins. It ends the sequence of life from boyhood to old age. I'm impressed to be honest and certainly what is on offer was not what I had expected.

Side 2 opens with a prelude to 'Cecilia', but this one is much more psychedelic. The organ is as delicious as is the singing. Handclaps lay down some great accents. 'Fakin' it' starts out as a Donovan influenced song, but listening closer 'Fakin' it' ought to be covered by The Kik soon. They can make a beautiful Dutch language beat rocker out of this song. 'Fakin it' grows bigger and smaller, but has a surprisingly strong rock riff at its heart. I look forward hearing The Kik at play with this riff. 'Fakin' it' may not be a typical S&G song, but I'm really liking it. 'Punky's dilemma', the next song, is as relaxed as a song with a punk reference in its name could ever be. (Remember the band America? Then listen to this song. It's quite telling.)

The hit is 'Mrs. Robinson'. One of the best Simon & Garfunkel songs. Period. From the lyricless beginning, dee dee, doo doo, to the beautiful guitar parts and the harmonies of S&G. Everything works in this song. The song suggests a stroll through the park on a beautiful sunny day, while nothing is in it's place for Mrs. Robinson any more. Another rock riff on an acoustic guitar by the way. Simon & Garfunkel have never come closer to being a rock act. as The Lemonheads proved on one of its albums. A bit strange song about animals 'At the zoo' ends it all. (A later version on cd has another strong tune on it 'You don't know where your interest lies'. A strong and powerful song and loud by S&G standards.)

The funny thing is that I've added this album to the 1968-1969 list as a sort of afterthought, with 'The boxer' in mind, until I realised 'The boxer' is on 'Bridge over troubled water', which is from 1970. Am I glad that I've done so. It seems like I'm falling for a 46 year old album fast. Simon & Garfunkel have surprised me beyond imagination. Bookends is an extremely strong and good album. Well made, influences were let in during the over a year long studio sessions, that both could not have imagined when Simon & Garfunkel started work on the album in the second half of 1966. Influences that have enriched the music of Simon & Garfunkel tremendously.