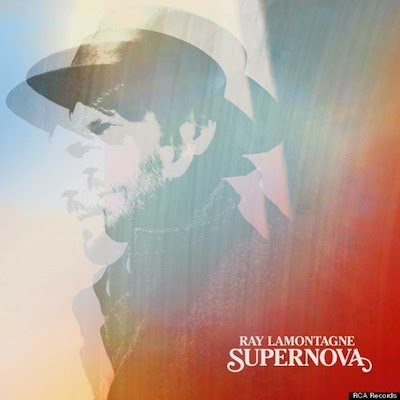 What a weird experience it is to listen to Supernova. Ray LaMontagne is lauded by many in the past circa 10 years. Several now ex-colleagues spoke highly of him as did Hans of Q-Bus Leiden. And me? I just didn't hear it, get it, could not relate to LaMontagne. Then Erwin Zijleman wrote his review of Supernova. What became clear to me was that Ray LaMontagne was off the road and apparently badly. I decided to give Supernova a listen or two, three and more. Supernova slowly grew on me and it seems like we finally have a match.

Ray LaMontagne is a singer-songwriter from the U.S. who decided at a later age that he would become a professional artist. When he released 'Trouble' in 2004 he was past 30. This album made him a name in the singer-songwriter section of the musical world. Supernova is his fifth record and a very different one from the music that I'd heard before. Not for 100% as his voice is what it is of course. Seen from this angle, Supernova is a brave album, something no one not close to Ray LaMontagne could have foreseen coming. LaMontagne immerses himself in 60s psychedelia, with his acoustic guitar as the mainstay and backbone of the songs. The great combination is the dreamy elements in 'She's the one' and the aggressive fanatical way of singing and the lead notes on the electric guitar. It's loud in parts and holds back, allowing the dreaminess to shine through, all within one song. Just very well done.

Supernova is an album that has totally surprised me. At first listen it didn't do very much. A recognition of style at most. The surprise came with each spin there after, those moments that I recognised that something was happening between Supernova and myself. With each aaah-aaah in 'Pick up a gun' the song crept deeper into my conciousness.

The album opens with an instant winner though. 'Lavender' is a song that could have been on many an album from the late sixties. The hard played but low mixed acoustic guitar drives the intro. The dreamy psychedelia that settles in, holds the best of the era. The sort of song that many sought to make, but rarely succeeded in. 'Lavender' holds it all. The singing (that is double or multi tracked), the organ, the little notes here and there. The vocal melody that just floats over the music, treated here and there to turn the floating into hovering. The contrast with the second song is huge, as this reminds me more of the traditional Ray LaMontagne. A singer-songwriter song with a hint of Caribbean rhythm, as if the psychedelia of 'Lavender' is just a fad. Not unlike Shane Alexander in the opening song of 'Ladera'. This is not the case.

'Julia' is this stark rocker with 1967 rhythms and guitars. One of the guitars just produces this warble of one stroke or a few warbled notes behind each other. The song is fairly simple, but works quite well and certainly put in this place in the sequence of the album. The soft tones of 'No other way' with some country twangs of a lap or pedal steel guitar tucked neatly away within the song, call up these dreamtime quality again. Lalala seldom sounded so nice as in 'No other way'. Again there's something exotic in the song as well. A reference to a kind of music that does not belong in singer-songwriter music that dipped its guitar into a LSD well.

By the time I start looking into who is responsible for all this pleasantness, I read the name of the producer: Dan Auerbach of The Black Keys. Where The Black Keys receives assistance from producer Danger Mouse, Ray LaMontagne turned to one of the most successful artists of the last five years for help. Together they jumped of the deep end and came up tops. Nearly all songs sound extremely interesting in melody and texture. The approach is diverse and that makes Supernova an extremely interesting and rich album. There is so much to discover!

'Ojai' is just a country sort of ballad kind of song. It could have been totally corny, but there are these accents that give it an oomph. These piano notes that come in and go out of the song. A rhythm guitar that just does one stroke on each 4 measures. Thwack, accent. A minor detail, but it provides 'Ojai' with this little extra. After which we're back to the hashpipe and dream away on 'Smashing'. Great diversity again.

Ray LaMontagne seems to have jumped on the psychedelia train of 2013. An impulse to his career or killing it off? It is quite a move to make in the conservative kind of music sphere that he was in. Time will tell. As I already wrote, Ray and I finally have a match, so you won't hear me complain. Am I unique? No, I don't think so.