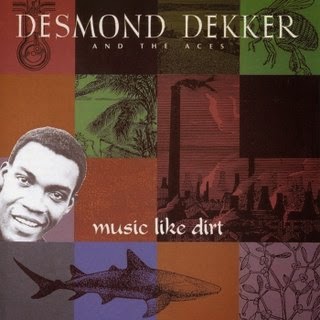 Since some months WoNoBloG runs a special series with albums from 1968 and 1969, with the likes of Blue Cheer, Blood, Sweat & Tears and Spooky Tooth. Here's another contribution to this series.

In spring and summer of 1969 I was exposed to a sort of music for the first time in my life of which I only learned two or three years later that it went under the name reggae. Thanks to a special on Belgium television. Desmond Dekker (& the Aces) scored a number one hit with the song 'Israelites' in the Radio Veronica Top 40 in the spring of 1969. A very atypical song for the time, but followed by several other songs by Max Romeo and Jimmy Cliff. Being 9 years old, I assumed that the song was about Israel. It is not. It is about working hard for money to keep a family, were it not that the wife left with the children and the "I" does not want "to end up like Bonnie & Clyde". In other words about life on the fringes of society. Later in the year Desmond Dekker & the Aces scored a second hit 'It mek' of which I do not have any recollection. 'Israelites' is a song that can be heard to this day.

Looking for music by Desmond Dekker & the Aces I found this album: Music like dirt or 'Intensified '68, what appears to be the original name of the album. An album without 'Israelites' on it. Desmond Dekker produces music that is standing on two principles. On the one hand there is an older form of reggae, rocksteady and ska, while other songs are more reggae as the world would get to know it in the 1970s thanks to Bob Marley. Not unlike the music UB 40 unleashed on the world with its first 'Labour of love' album in the 1980s, that spawned so many (no. 1) hitsingles.

Music like dirt is an upbeat album. On the one hand because of the music that is so deliciously fun sounding. This has nothing to do with the quality of the recording. This is mono, with a sense of depth of instruments stacked behind each other. No, it is the backbeat that invites me to move my limbs. Even when sitting down typing this post, I'm moving my head, neck and shoulders. To the rhythm, but also to the guitar eruptions or the horns that kick in every once in a while.

The other hand is about the voice of Desmond Dekker. Dekker simply has a very pleasant voice to listen to. A bit high perhaps, but far from irritating. This is the only way to listen to Desmond Dekker that is left though. He died in 2006 at the age of 64 of a heart attack in London. He was born as Desmond Adolphus Dacres in Kingston, Jamaica in 1941 and started recording in 1963. His first hit in the U.K. was in 1967 with '007 (Shanty town)'.

Reggae has never particularly appealed to me. Somehow to serious and monotonous. This problem is nearly taken away by Desmond Dekker. The way the reggae rhythm is played on Music like dirt, it is infused with a pop element and the joy of singing harmonies. Dekker and his Aces, Wilson James and Easton Barrington Howard, weave their voices together in intricate ways. High, low and in between.

A few songs stick out. I just love 'Rudy's got soul'. What a fun track. 'Personal possession' is heart felt, and I can only imagine what it could have sounded like nowadays. There's a lot of tape hiss on these recordings. And the hit? As said it's not on this album. The other one is. 'A it mek' was a logical choice listening to it in 2014. The rhythm and sound resemble 'Israelites' up to a certain extent. Having said that, the song has it's own quality. Just listen to the horn section and is just a little bit more upbeat. It can never compete with the impression imprinted in me 45 years ago, but may actually be a nicer song.

The more Music like dirt moves on, the more the songs turn into "real" reggae, while at the same time a song like 'Don't blame me' is so 1950s non-rock & roll U.S. music. A blend of two cultures and a good as well as nice blend it is.

Music like dirt is an unexpected pleasure. I expected nothing from this album, was presented with a sort of music that I know little about and was hardly familiar with. It managed to surprise me. This will not be the last time I've played Music like dirt, no matter how poor the recordings sound. Music like dirt is fun and has quality.