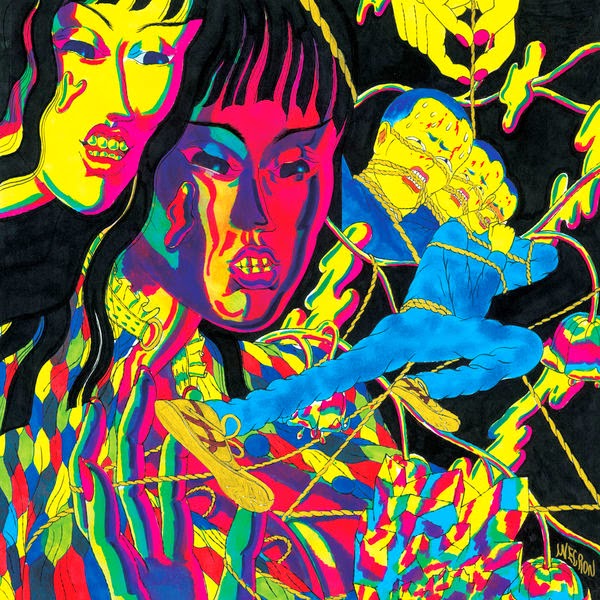 Drop is a favourite Dutch sweet, although the term sweet is not to be taken literal necessarily. The black, sticky substance can come in all sorts of shapes, sizes and taste. Licorice is the English translation. During a visit to Verona in Italy last summer (ca. 40 degrees C) I was totally surprised by the smell in a shop I stepped into to buy something to drink: licorice. In Italy!

Drop is also the title of the latest Thee oh Sees album. Following up on 'Floating coffin', that received a favourable review on this blog only about a year ago. Drop acid is a term that was used a lot in the first Summer of Love in 1967. Looking at the cover of Drop, that could be a the meaning of this title. The trip following the dropping does not like a good one. More like the paranoid kind, the nightmarish variant in one is being followed it seems. What is real, what is not? In such dreamlike states it is often hard to tell. The music on Drop is psychedelic, murky, darkish. Everything is made just this little bit uglier than strictly necessary. Presented in such a way that listening to Drop because it sounds nice is no option. The music is presented in an obscure way, cluttered. The search for beauty is made harder, but search and you will find. This is, in the end, a trip with a happy ending.

'Floating coffin' was my first Thee oh Sees album. I took a sort of instant liking to it, but I have to admit without making it a permanent relationship. What it did leave behind was a curiosity for more music by Thee oh Sees. So Drop was listened to straight after I found out about its existence. As you'll have discerned from the long intro, it did not disappoint. From the very opening I have a shortage on ears. There are so many sounds in 'Penetrating eye'. Some sound like concrete, the rhythm guitar sounds of grunge heroes The Smashing Pumpkins, some elusive, at times even irritating small sounds,, hidden beneath or lurking on top of vast layers of sound. Where does this come from? 'Encrypted bounce' is more straight forward. The rhythm leads the way here, but also here the lead guitar(s) go off in backwards direction or other strange treatments.

The trip really starts in the third song. Hash pipes or LSD savoured sugar cubes take your positions now. 'Savage victory' is the musical equivalence of a trip. The Mellotron is swerving around like a flying carpet on an erratic wind. The vocal melody sounds insecure as well. It is the snare drum and the rhythm guitar that give 'Savage victory' its body. Steady and unsteady at the same time. Bass-bam-bass-bam-bass-bam-bambambambam. Extremely hard to hold on to. By the time 'Put some reverb on my brother' sounds through my headset, Drop has shown that this is a no bars left, anything goes sort of album. This song has a delightful acoustic version that reminds me of The Rolling Stones of 1967, but takes some twist that could be on 'Their satanic majesties request' as well.

The best song so far is the title song, 'Drop'. A jagged rocker, with a great 'aaahhhaaahhaa' part in it. Just a little bit more melody. Either by listening longer into Drop I get more in the mood for/of Drop or the songs become better. 'Camera (queer sound)' is a song The New Pornographers would have been quite content with. John Dwyer's voice delivers a bit better as well. 'King's nose' could have been on Jacco Gardner's album. I wrote enough here, for you regular followers of this blog.

'Transparent world' is extremely dreamy and floating. Or submerges like the first tea that comes out of the bag after being submerged in boiling water. Those moments before it totally takes over. 'The lens' is the last song. This slow psychedelic ballad is quite to my taste. The right melody, the dark sound of a cello and wald horns or something like them. 'The lens' is an utterly playful song, serious, but playful. Thee oh Sees has found a perfect balance here, that would have scored a hit in 1967-1968.

If I have to write something negative about Drop, it is that the sound is very murky, which at times makes it hard to discern what is going on in all the darkish corners of the songs. And a lot is going on, I can assure you. On the other hand, this could indicate that the album can grow over time. The other thing is that Drop may prove to be so 2013. No one was waiting for another psychedelic record come summer 1968, while in the spring of that year it was still considered very trendy. 'Lazy Sunday', anyone? The Beatles led all away with 'Lady Madonna' in the spring. The Rolling Stones followed with the first song of the cycle that would really define its career: 'Jumping Jack flash'.

With just more than 31 minutes it is all over. Thee oh Sees can be lauded for not overly extending their songs unnecessarily. Despite of a bit of a dip in second half of Drop, the album has a selection of great songs, that, despite the aural mist created in several of them, sounds clear. A lot of attention must have gone into the production and mixing of Drop. It's time to admit I like Drop, just like I liked 'Floating coffin'.

You can listen to Drop'' here.