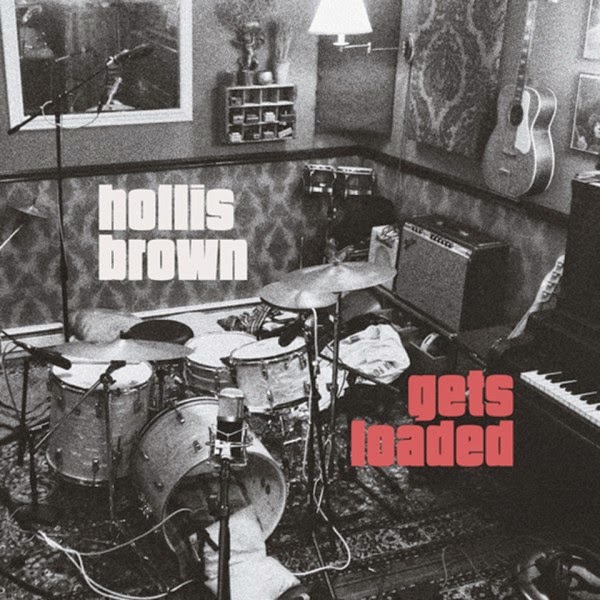 Last year there was quite some attention on this blog for the debut album of Hollis Brown. Now the band is back with a new album. The strange thing is that it is a new album, but there's not one single new song to be found. 'Ride on the train' was an album with songs that were a mix of early to mid 1970s influenced songs. From CCR to The Eagles, traces of those bands could be found for all with the right ear for the music. On Gets loaded Hollis Brown brings a tribute to a band that, rumour has it, hardly anybody saw play in the five years it was together, but that everyone who did see the band play, started his or her own band straight away. This band is one of the elusive mysteries in music that only a few bands share: totally unsuccessful (commercially), but hugely influential. We are speaking of The Velvet Underground here of course. And those who know the repertoire of that band have guessed which album is being covered here integrally: 'Loaded', the 1970 swan song of The Velvets. Integral is not completely correct as the album starts with that treacherously sweetest of The Velvet Underground songs 'Sweet nothings' and ends with 'Who loves the sun'. Surprising also, as 'Loaded' is not exactly the most critically acclaimed album of the band.

This almost necessarily becomes a post about 'Loaded' and Gets loaded, The Velvet Underground and Lou Reed more than Hollis Brown. Still, you will find that the balance is there and a surprising conclusion or two are divulged. Let's start with that this is a quite pleasant surprise.

Lou Reed's career in most obituaries that I read was comprised to the four albums he made with The Velvet Underground and a 44 year solo career was sort of hidden away, disappeared almost. Hollis Brown participated in a Lou Reed tribute in his and its home town of New York City and decided to extend this tribute with a whole album. I had bought 'Loaded' as an album somewhere in the 80s, probably second hand. It was one of the two or three albums in my possession that someone decided to put a steaming cup of tea on top of the sleeve. A killer for the vinyl record inside I can assure you. Hence, I sort of forgot about it and it wasn't my favourite one anyway. That were 'The Velvet Underground' and 'VU'. So that makes Gets loaded a sort of re-acquaintance with 'Loaded'.

The Velvet Underground is best know and respected for its songs without mercy or compromise. 'Sister Ray' is at the high top of all that. Unlistenable avant garde noise. Relentless sensory overload. And then there is this other side. The side in which Lou Reed let out all the other influences of his youth. The sweetest ballads, rock and roll, doo wop and even a little country. They can be found on all albums with the exception of 'White light/White heat'. All these influences came out in the songs on 'Loaded'. And Hollis Brown makes these songs come alive as if they were written in the past few months. A song like 'Lonesome cowboy Bill', which I've always considered mediocre at best comes out trumps and shiny in this version. The same goes for 'Head up high'. The song is turned into a Creedence like blistering rocker. Where The Velvet Underground was on its very last legs in 1970, despite holding two songs that would remain a part of Lou Reed's set for most of his life, Hollis Brown attacks 'Loaded' with fresh energy. In short making Gets loaded a better album than 'Loaded' ever was in my opinion. This band was having fun when it re-created 'Loaded', Lou Reed was on his last legs and unbelievably chagrined in his playing, but most certainly his singing, putting a negative stamp all over 'Loaded'.

It is in the moments that Hollis Brown excels in bringing out the beauty and best in the songs of 'Loaded', that The Velvet Underground is somewhat demystified. Beneath it all was a band and a songwriter who knew what it takes to write a great pop song. 'New age' with a little imagination thrown in could have been a Sonny & Cher song and certainly a Jefferson Airplane one. Not all things are totally strange in Lou Reed's world. It is more the approach and probably voice of Lou Reed that stood in the way of bigger success. It certainly are not the songs. Just listen to how rough and dangerous 'Cool it down' rocks here. With some great harmonies, that are all over Gets loaded. If it shows anything it is that Lou Reed was a great songwriter, but at the time perhaps not the best judge of his own performance. I wasn't around at the time, but it may also be that he didn't really fit in a band and operated with too much dédain towards his band members. (Of which Doug Yule had a great voice for Lou Reed's best ballads.)

By then I'm totally convinced that Hollis Brown made a great move with this recording. And the two "hits" of 'Loaded' still have to come. 'Rock and roll' and 'Sweet Jane'. My favourite was always 'Sweet nothings' though. The song that ends this feast of recognition and re-acquaintance, 'Who loves the sun', the last song here, underscores everything that I wrote before. This song shows all Reed's loves in music from his youth including some doo wop, the subject is dark, but sweet in execution, but Hollis Brown sings this so much better, making it, well, a classic song. Just what it deserves to be. What a feast Gets loaded is.