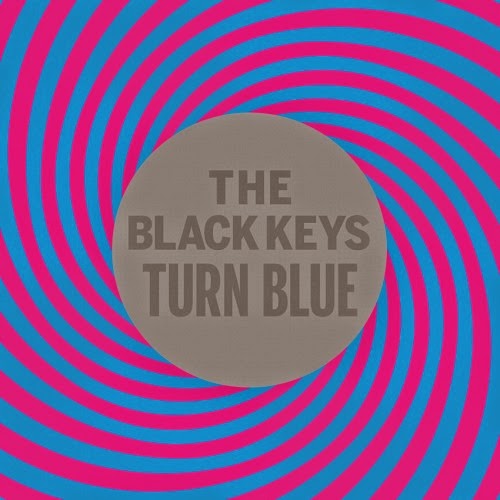 'El camino' was an almost instant favourite of mine. Effortlessly it made my 2011 end of year list, while I hummed 'Lonely boy' and 'Gold on the ceiling' for more than a year. Before that I had not really taken notice of The Black Keys. I did not think them special enough to spend a lot of time on. This changed because of 'El camino' and I was on the look out for Turn blue for some time. Who sketched my surprise when I heard something not unlike 'Moon safari' by French synth retro dancers Air come out of my speakers? And me liking it, as several songs on 'Moonlight safari' are definitely one of my guilty pleasures.

Everyone knowing a little bit about The Black Keys will have heard about the separation issues following Dan Auerbach's divorce. The result is The Black Keys' huge divorce record. The other factor in the equation is how often the two key members of The Black Keys, that sort of is a duo, but no longer really, are mentioned in production duties for colleague artists. Busybodies Dan Auerbach and Patrick Carney are and hugely influential.

Turn blue most certainly is not as easily loveable as 'El camino' was. For that the album has too many layers and different textures that have been added to the songs. There are no instant hits or favourites.  I was even sort of turned off during the first listen session. Not taken aback, I started all over again and soon noticed in what an exquisite and beautiful way 'Weight of love' opens Turn blue. If the (long) intro is Snow White, the guitar solo is the jealous stepmother. 'Weight of love' is dreamy, not necessarily a pleasant one, but a dream non the less. This song is so good. An epic rocker, as they were made long ago. Let's say the 1970s and Robert Plant's 'Big log' as a late reminder of the genre. The kind of song that says it all and I want it to go on for ever. In other words, 'Weight of love' stops at the right time just under seven minutes.

Another surprise is that Auerbach has found his inner Bee Gee. His falsetto is recognisable on Turn blue quite often. Turn blue may be an album that was inspired by dark spots, happenings and places, something else keeps sending messages to me also. Turn blue is a loosely played album. A sort of letting go atmosphere in which a lot of different sounds are produced. Some instruments, some more meant as atmosphere colouring the background. Like the dark swirling synth sound on title song 'Turn blue'. It hovers through the melody like an irritant mosquito in bed after lights out. Or a very heavy indigestion. Yes, dark, but also extremely playful.

Let's face it, the organ playing the main melody of 'Fever' is nothing but fun and tries to emulate the two main hits of 'El camino'. 'Fever' is not that good, but has a melody that does not easily let go. 'Fever' shows the main difference between 'Turn blue' and 'El camino' exactly. The song doesn't sparkle. It  misses that ray of light and is harder to digest.  The same goes for 'Year of review'. The songs have a sense of melancholy over them. 'Bullet in the brain' also has a blanket over it, leaving the light out, but is one of the most beautiful songs on Turn blue. The intermezzo with just bass and drums, allow for the vocal melody to shine and then the lone notes kick in. Great dynamics, beautifully executed, well played and sung. The bass seems to hold the rhythm back the whole time, by leaving just a little more space than expected or playing just behind the expected moment. Sort of Air, yes. Danger Mouse/Brian Burton co-produced and wrote the album, again proving how successful he is in different genres. With 'After the disco' of his own duo band Broken Bells and Turn blue to his name this year, I do not need to mention more on the topic.

By then it's clear that Turn blue is an album that had to grow on me. Step by step, spin by spin I was conquered. Whether Turn blue will be my favourite The Black Keys album, I can't yet tell, that it is one of the more important releases of 2014 is already beyond doubt. Just listen to the stripped down 'Waiting on words'. The Black Keys leave away a lot of the effects for most of this song and the melody conquers all. When a little extra jumps in in the second half of the song, they are just the right additions, underscoring the strengths and making them bloom. This level is kept up easily right up to the end. Turn blue contains mostly winners and two songs very close to that and one dip. It shows that The Black Keys are here to stay as one of the top bands in rock in the 10s.

And the divorce? There's always another side to the story, remember. We're hearing only one side of it, but what a side it is.