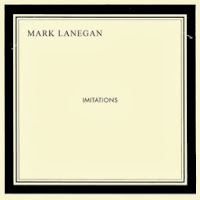 Mark Lanegan, once famous through the band he fronted in the days of grunge, Screaming Trees, for years now has gathered fame through a multitude of collaborations with other bands or artists. In 2013 he has already released an album, 'Black pudding' with Duke Garwood. Now there's one full of covers from decades past and closer to our time. If I have to use a word for this album, I can’t come up with a better one than the Dutch “zeiksnorren” album. Let me ponder on a word that corresponds with it in English here. Imitations would be unlistenable were it not that Lanegan sings great and the accompaniment is done in great taste.

Imitations is at its fastest a mid-tempo ballad album. Most songs even slower. Lanegan even sings one song in French ‘Elegie Funebre’, a point where the album really keels over, to land on its feet further on. Imitations is a delicate album. Purely aimed at the mood. The question is, why did Mark Lanegan want to make an album like this? Why go into the soft side of pop? E.g. ‘Lonely street’ should have been sung by the likes of Tom Jones in the 1960s. It has nothing to do with the rocker, Mark Lanegan is and a dangerous one at that. Mark Lanegan is usually able to make one's skin crawl with his dark, gravelly whiskey-sour voice over the right spooky music. So where does this side step come from? It looks like he loves these songs, some he grew up with as a kid and always loved them. And wants to show the world he can sing (them). Does it take a better reason than this? Guess not.

On Imitations Mark Lanegan keeps things extremely sober. There are no more instruments is sight than it takes to make a song come alive. Some light female background voices. Lots of strings as these sort of ballads need. So what are we talking about? The song which is the opposite of the modern war cry of youth: “YOLT”. The old Bond theme song, once sung by Nancy Sinatra comes alive here in an even darker way. One of the best songs on Imitations is ‘Solitaire’, the Andy Williams song. ‘Autumn leaves’ is another one (more Andy Williams), in which Lanegan really hits jackpot, in this totally schmaltzy song. I guess this is the right description for the Dutch word I introduced the album with.

The album starts with ‘Flatlands’ (Chelsea Wolfe), a song which comes closest to what Mark Lanegan usually does. It sets the mood of the album, but also gives a wrong impression. ‘Flatlands’, with its almost looped guitar motive with a bent note for emphasis, could still announce a regular Lanegan album. O.k, in the second part  of the song there are a lot of strings, but still. It doesn’t prepare the listener for what is to come. ‘She’s gone’ (Vern Gosdin, from the famous album with Gene Clark)) takes us back to 1950s country, or what I think that is. It starts off sort of horrible, but takes a right turn soon after. It only underscores how diverse this album is from the songs Mark Lanegan chose to sing on this album.

Summing up, Imitations is an album that I’ve listened to regularly in the past weeks. I was intrigued as well as turned off, simply depending on my mood. Whether Mark Lanegan really pleases his fans with Imitations is a question that time will answer. It has all the signs that he had a great time making it and wanted us, the listener, to enjoy it as well. 50% score here, with positive overtones.

So what remains is the dark cover of Imitations. It looks like a death announcement card. In honor to the mostly deceased singers he honors?