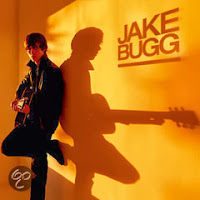 Wow! Breath deeply for a moment. Let me gather my breath here. What a record Shangri La is. Yes, I did like Jake Bugg's first album last year, but what seems to have happened here is that this youngster from the U.K. has made a giant jump into new registers of his songwriting and performing capacity. We are all roughly one year down the road and Bugg comes up with a record like Shangri La, after touring relentlessly for a year. He shows a lot of the promise 'Jake Bugg' seemed to offer, a jump not unlike his heroes, The Beatles, made in 1963.

Shangri La is the title of one of my most favourite The Kinks singles, released in 1969. Finally a chance to mention it mention in a post. Go and listen to it. The link is also below.

The Kinks' finest has not much to do with what is on offer on Shangri La. There is some Arctic Monkeys influence left, some Oasis, a smatter of psychedelia, Led Zeppelin, Fleetwood Mac mach I, but Jake Bugg kicks off as the young Dylan who's just gone electric. The same bluesy music, the same sort of sneer in his voice, the same intensity. 'There's a beast and we all feed it' starts acoustic. "Stop", one new line and the electric guitar kicks in, hand claps punctuating the urgency of 'There's a beast ...'. The song is so fast, has so many words, words that fly around all over he place, that I just didn't realise this songs clocks in at 1.43. What a way Jake Bugg opens his second album. Confidence, urgency, happy to share his new songs, it's all in there.

The fun simply continues as the fast riffing that announces 'Slumville sunrise'. Fast country rock style guitar playing. If you thought 'Lightning bolt' was good, listen to 'Slumville sunrise'. This song shows the growth of the now 19 year rocker from Nottingham. A great up tempo guitar solo graces the song, but is over before I know. Again so many words and like Dylan they shoot over all metric rules, but are spat out with flawless timing in the right place.

Not all is up tempo on Shangri La, but Bugg again pushes in the pedal deeply on 'What doesn't kill you'. The fine line between rock and punk is explored successfully. Listen to the way a fuzzed bass underscores certain parts of the song and disappears again. Such a small, but great effect. There's some The Undertones and Buzzcocks in here. A sure live favourite, exciting and a straight invite to pogo. Again fast and short, 2.09. It's only in the fourth song that Jake Bugg shows us his more mellow side. There are the elements of singer-songwriter in 'Me and you', a song that holds a perfect line between melancholy and urgency. With a beautiful turn in the song, that shows the prowess of Jake Bugg's songwriting.

'Messed up kids' goes one layer deeper. Kids that sell themselves, drugs or whatever on streetcorners. This is only the lyric. The music is so compassionate and warm, that I'm amazed by the effect of the song as it evokes the pictures vividly. At this point we are only five sings into Shangri La. 'A song about love' is next and also here hearing is believing.

It's time that I leave you listener, so that you can find the time to start checking out Shangri La yourself. Jake Bugg is two albums under way, but hearing his latest album and only within one year after his debut, it appears I'm a believer. Jake Bugg is a serious talent, there's no other conclusion possible.

Rest me to complement Rick Rubin with his clear production. Rubin stripped down to the essentials and lets us listen to Jake Bugg in his full glory. A producer who sets his own ego aside to let the artist shine.

You can listen to 'What doesn't kill you' here.