Another self portrait. The Isle of Wight show. Bob Dylan & The Band 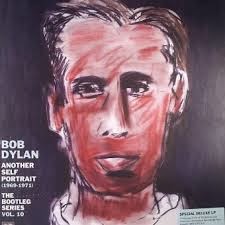 For a few days in a row we are going to look at recent releases from the great of past years. Another self portrait is the next in line. The first two albums of this Bootleg Series no,10 set were reviewed before on this blog (click here). In this post we focus on the additional cd with the show Bob Dylan and The Band gave at the Isle of Wight festival in 1969.

Any one who's read Ian Bell's biography on Dylan knows that Dylan came to the Wight festival for an amount of money that he probably doesn't even do a single show within a whole tour any more. At the time it was an amount that got Dylan out of hibernation for a one off. Through the years generations of Dylan fans have read about this legendary show, but never heard it. What the impact was, can't be recreated in an official release. Only the people who were there can tell you. Remember this is only three years after the "Judas" incident in Manchester. In the time after Dylan has become a rockicon and a recluse. Putting out records at a steady pace, that go off in many direction, but seldom seen a a stage. Having left (blues)rock behind in 1966, Dylan explores other forms of music. Singer-songwriter songs with strong imagery in his lyrics of biblical proportions, as well as folk and country, showing influences from his teen years listening to radio shows in his Hibbing, Minnesota boys' room. All culminating into the abhorred 'Self portrait' in 1970.

That is where Dylan is at in the summer of 1969. So where was Dylan at live in 1969? The show starts very hesitant. The Band seems insecure, almost as if the members do not know which song to start. It is Dylan who brings it all together. leading The Band into 'She belongs to me'. From the very  first beginning Dylan is playing with and within the melody of the singing, sometimes changing chords or adding one, making the song just a little different than expected. Listen to what he does with 'It ain't me, babe'. The Band is off stage by then or listening to Dylan going into his solo songs from the cherished folk days. A bit rusty in playing but very intimate and delicate in his singing. He wants to sing and please it seems. 'To Ramona' is a gem in this version. When he kicks off 'Mr. Tambourine man', the audience is cheering loudly by then. Totally pleased. So the impact seems to be considerable.

The Band returns with 'I dreamed I saw St. Augustine'. No one is booing. The audience knows where its Dylan is at. Happy that he's back on stage. The shock'd worn off. Together they go into what can now be called a greatest hits show, including 'Lay lady lay', one of Dylan's more beautiful love songs. It starts of in the wrong key, but it gets together quite fast. A fun version of 'I'll be your baby tonight' is thrown in as well.

What is one of the better treats of this album is the harmony singing of Dylan with Levon Helm. His rough voice, ages older than his then only late 20s age. Even rougher than Dylan's. Together they sound very special. The Band as a whole serves Dylan here to the best of its ability. Knowing Dylan, rehearsals may have been on the plane flying into the U.K. The piano of Richard Manuel and the organ of Garth Hudson work extremely well together. The latter sounding almost funky in 'Mighty Quinn'.

The rock side of Dylan is flashed out on 'Highway 61 revisited' and 'Like a rolling stone'. 'Mighty Quinn' is a nod to Dylan and the Band's 'Basement tapes' recordings, then not released for another six years. It all ends with the carnival song 'Rainy day women #12 & 35'. By then there is a simple conclusion possible. Dylan came, saw and won. This show, considering it was not a routine one, delivers the many sides of Bob Dylan in one show. A Dylan who had by then been recognised and embraced by his audience for the (divers) genius he was. A Dylan that would baffle the world soon with the horrible 'Self portrait' and baffle it again with 'Another self portrait 43 years later. This show was released for all the right reasons, as it lets Dylan and The Band at its best.