Much against everyone's advice. Soulwax 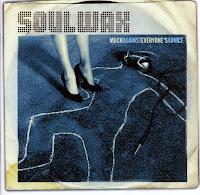 Time for another oldie. An album that I've sort of forgotten about, although one or two songs come by regularly on the mixtapes in the car. Much against everyone's advice is the second of Soulwax' three albums in 17 years time. A sort of unfulfilled oeuvre, as this band had so much promise, but the De Waele brothers decided on having another sort of career or perhaps this is just it.

It took me about three years to really warm to Much against everyone's advice. I first had the cd on tape, but did not build a relationship. This happened three years after the release in 1998. When the quarter fell, it really did fall. The enormous richness and power of the songs made an impression that never left me again. Singing the title song, 'Flying without wings' or 'Too many DJs' is something you can catch me doing regularly. The songs are welded into my brain.

Much against everyone's advice is a rock album, an indie one and it holds the promise of what was to come many years later in the form of the much more dance oriented 'Any minute now'. Soulwax is a band that is not easy to follow or understand. It holds many promises and colours. Any idea seems to have been a good one and the band explores these to the max. So a result could be complex rhythms in 'Funny' or several nearly perfect popsongs or strangely curved ballads. The treatment of traditional instruments is something Soulwax does not shy away from. Adventure mixed with tradition. Straight rock embellished with dance rhythms. Soft singing with harsh sounds. Everything is possible on Much against everyone's advice. A traditional ballad like 'More than this', acoustic guitar, double tracked harmonising guitar solo's, not unlike The Eagles, has these chugging synth sound going on in the background. The light sounding, slightly melancholic ballad gets a very dark overtone of estrangement this way. Beauty up front and darkness lurking in the back.

What Much against everyone's advice also holds, is one of my favourite pop entry lines: "If love ever comes barging in like that again. That's it, I'm calling security", sung with a perfect harmony on "security". And what about "Everybody wants to be the DJ", just before the De Waele brothers decided to become and stay Too many DJs. Or "Oh, proverbial pants, please not again". Proverbial what? There's a lot of detail put into the lyrics. They certainly add to the pleasure of this cd.

The mix of pop, rock and dance is near perfect on Much against everyone's advice'. Soulwax gave the world an example of its prowess and a huge promise for the future. Follow up 'Any minute now' (2004) was harder, more electronic and just not as good, although this was only by comparison. This album is just so fantastically good that nearly all falls away by the wayside. This year it is 15 year's old, what can I say about the passing of time? Now I read on Wikipedia that there is a hidden track on the album. 50 Seconds before opening piece 'Conversation intercom'. Time to find out!

You can listen to 'Flying without wings' here.