The bones of what you believe. Chvrches 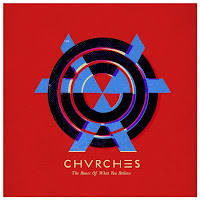 A deliberately wrongly spelled name. Usually it heralds something forced. Sticking out with a name instead of the music. So Chvrches had to do a step extra to convince me, so I thought. Actually it was an easy push over. The bones of what you believe is a electronic pop album, that holds many a fine and fun tune. Lightheaded, with a dark cloud here and there, describes it best.

The 80s is at the basis what Chvrches does best. Depeche Mode, Erasure, Yazoo sounds. Electronic beats and synthsounds all around with metallic sounding effects for the extra effects. Treated ah ahs become part of the rhythm in 'We sink' instead of background vocals. Bleeps and blops pop up in looped sequences. Over all this Lauren Mayberry sings with a high girl voice. Iain Cook and Martin Doherty do the other stuff, mostly. Including some vocals here and there.

Chvrches is a relatively new band from Glasgow, which by now can call itself a true pop town. It formed in 2011 when Cook and Doherty started writing together and asked Mayberry to sing on the demos. From one thing came another and after an EP and a single the whole album is there, having been released in September. The band opted for a totally electronic album, but it did not forget is to add a human angle to it. Mayberry is certainly responsible for that, but it is also in the music. Where most electronic and new wave 80s act explored the dark side of human kind, sexless, android, depressing and void of pleasant emotions. (Sound familiar? If you read this blog earlier this week it will) Chvrches manages to sound warmer, even in a darker song like 'Tether'. The high end synths sound almost exhilarating.

What I like to be able to mention is that I recognise the Man Without Hats' 'The safety dance' in 'Lies'. It has the same halting rhythm and atmosphere. This was one of my favorite 80s singles. I never heard a single other song of that band by the way. 'Lies' has the same quality. Deep, dark rhythms combined with a certain playfulness. This word is a fairly good description of the music of Chvrches. The people behind Chvches may be influenced by the 80s, they have not forgotten to enjoy life in the meantime. Not all is doom and gloom in 2013.

The bones of what you believe is a pop album with a lot of quality. There are joyous songs to enjoy, turns and twists in the music that make it interesting to listen to. It may be electronic, but there's life in there also. Chvrches has produced a great combi.