On air. Live at the BBC, volume 2. The Beatles 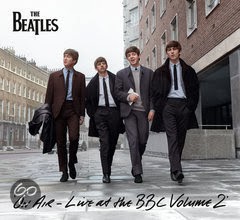 For a few days in a row we are going to look at recent releases from the great of past years. On air is the first of these.

On air is an album that shows a main aspect of The Beatles as they were in the first phase of its career: the show band they used to be in Hamburg on or near the (in)famous Reeperbahn. The redlight district where the band performed for long nights in a row and made its 10.000 hours to grow into complete proficiency on the instruments. Of course some of the hits were played in these radio shows on the BBC, but mostly The Beatles' songs from its albums and the many covers the band played in Hamburg. The songs that all the bands played those days and many a cover band specialising in 60s music for parties play to this day.

The period till roughly 1965 is not my favourite The Beatles period. Sure, there are great songs, fantastic hits The Beatles scored, but it is not the period that made the band unique for all time. It's the period that led to that. 'Yesterday' the 1965 #1 hit is the watershed single as far as I'm concerned. It is just about the last single my late aunt liked, backed by the last cover the band released on single, 'Dizzy miss Lizzy'. I remember I always wanted to hear that side (and my aunt didn't). It is after 1965 that the fun really started ending it all with the best album the band made: 'Abbey Road'.

On air is the rendition of the radio shows the BBC made with The Beatles after its major breakthrough in 1963. The band got its own radioshows in which they read requests, had small conversations with the host of the program, answer small questions. The first real teenybopper band, attracting young (female) fans around the country in 1963 and from 1964 far beyond. The show is also a showcase of the work ethic of The Beatles. Playing live in the evenings, travelling in the small van at night, recording in Abbey Road and at the BBC in the morning and early afternoon.

What On air also shows, is that the BBC recording sessions were taken very seriously. Despite that the voices in some songs sound a bit worse for wear, there is no holding back. The fans at the radio set get the best that is on offer. The quality of the versions depend on the conditions under which the recordings were found. Most at the BBC, some with fans who still had a home recording of a show.

There are not to many songs I hadn't heard before, but to have them on a new record set together, is a treat even after the band split 43 years ago. Just as a thought, it's amazing that a band that isn't around any more for such a long time, has such a rate of new records being released. Every other Christmas there's another treat for the fans. Although I can't imagine what ought to be next, I let myself be surprised in 2015.

On air won't win The Beatles new fans, but old ones will not be disappointed. This is The Beatles at its best, playing the songs they loved playing at the time, songs that they couldn't play in the short live shows they played at the time. Not all songs are particularly personal favourites, but give a great overview what songs the average teenager and early twen listened to around 1960. It doesn't get much closer to that than this.

What the cd also allows for is showing how becoming a Beatle changed the life of e.g. John Lennon. In a bonus interview questions on the size of a home, his first Rolls, how fans impacted his life are asked. Everyone who's read something about The Beatles (or just watched some footage of the fans' behaviour) can know how this must have impacted the lives of these four young men. Hearing it first hand, makes it just a little bit more personal.