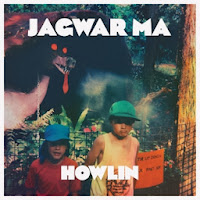 It's been a while, so lets do another new psychedelia album. This time it is Howlin by Australian trio (or duo depending on the Wikipedia version) Jagwar Ma. The trippy sounds on Howlin refer as much to The Happy Mondays and The Stones Roses as at its far outest as 60s experimental psychedelic music. Jagwar Ma combines this with modern beats. The singing is "real" singing, with some nice harmonies. Dreamy is the right description. There is not so much a tight focus in the singing, but it fits this music like a glove.

Jagwar Ma consists of Gabriel Winterfield on lead vocals and guitar, Jono Ma on guitar and everything electronic and Jack Freeman on bass and backing vox. The band releases singles since 2011, but Howlin is its first full length cd. The recording mostly was done by Ma, with singer Winterfield.

Rhythm is a firm basis for Howlin. (Digital) beats are underneath everything, with the bleeps and other sounds that make up the limbs of the song. Over all this Winterfield at times more chants than sings. Lines are near endlessly repeated, like he's trying to put us in a trance ('The throw'). 'That loneliness' is more song oriented. More poppy also. The beat here is an undiscoed Michael Jackson ('Beat it'), the song is another variation on trance singing. The lyric is different, the melody is not that important in 'That loneliness'. The end is repetition again.

When we go past this Madchester influence it possible to discern influences of The Beach Boys, Syd Barrett's Pink Floyd and pop songs from The Tremeloes to American Breed. With one major difference that the elements are there, but Jagwar Ma never reaches that level of perfection. It doesn't attempt to. The songs on Howlin are aimed more at effect than to reach perfection. This is where the dance element comes in. Jagwar Ma obviously has or wants to build a relation with the dance floor. Most songs on Howlin are not songs in the 60s traditional sense. They are too much looped, to fragmented to score as a perfect pop song. It is possible to dance to most of the songs in a trippy, hippy kind of way. A song like 'Four' is pure effect, with the least song elements in there. Samples and loops, strange bleeps go around over the beat. Just imagine the fluid projections in the background and go off.

This is also the reason that at times I have a hard time listening to Howlin. And then 'Let her go' starts and I warm all over again for Howlin. It proves that Jagwar Ma can completely write a very nice, trippy pop song. It has great harmonies, fine twists and a few perfect lines in there. India has not passed Jagwar Ma by as well. Perhaps not so strange with an Indian sounding name, apparently a combination of a jaguar painting and Jono's last name. 'Man I need' has a very The Beatles/George Harrison structure with The Stones Roses' flying rhythm. This last element comes back regularly. Even the bass pattern sounds very familiar in 'Exercise'. Enough small bits and pieces of many years of pop music.

In the last two songs the mood goes down. 'Did you have to' and 'Backwards Berlin' are these dreamy songs, slow and melancholy, that brings out the best in Jagwar Ma. Brian Wilson's influence is largest here. It shows that Jagwar Ma perhaps doesn't know yet what it really wants to be. The positive side is that they dare to experiment with different styles, with a hint at its own sound. Quite a feat for a first album or is a first album the opportunity to experiment as there are no expectations?

Taking it all in, I'm not sure yet which way Howlin is going to go with me in the longer run. For now it is an off and on affair. Intriguing though Howlin is, it is not always my cup of tea. It has many elements that are, but as a whole Howlin will just have to prove itself to me over time.