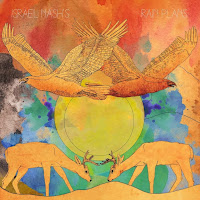 If I remember correctly Israel Nash Gripka was telling during the last show I saw from him in Q-Bus, Leiden, in 2012 about having moved to Texas and about living on a farm. Things with neighbours and guns and about the songs he was writing there. Here we are about a year and a half later. Israel Nash's rain plans is playing on my iPod. Whether I can credit the move to Texas for the change in music I can't tell, fact is that the songs on Rain plans are one step more subtle than on 'Barn doors & concrete floors'. It's more as if Israel Nash Gripka moved to California and became the neighbour of Old Dinosaur Sr. That he's the guy with the guns and stuff. So we have an album heavily influenced by Neil Young, but is it any good?

Gripka's previous album had some very fine tunes on it, but was not a one hundred percent convincing album. It had definitely had it's moments, while some songs showed great potential. At first listen of Rain plans this certainly has changed. Rain plans has a distinct own flavour and pace. The pace being mid-tempo and slower songs, the flavour country-rock. Rain plans takes the listener back to the 1970s, the heyday of west coast countryrock. The Eagles on its first albums, CSNY, Neil Young, etc. It is this atmosphere that Gripka is emulating successfully. So what we hear is a layer of different guitars, from the pedal steel, to acoustic, a soft riffing electric guitar and other guitars playing soft toned loose notes or a fine solo in the background or front. Of course the mouthharp is not missing here.

Israel Nash Gripka not only sings slightly like Neil Young here, the background vocals have his typical ethereal quality also. The deeper voice backed by these high, thin voices. 'Who in time' e.g. could have been on any album like the A side of 'Rust never sleeps', 'After the goldrush' or 'Harvest'. And that is meant as a complement. If someone shows to be so much influenced as Gripka is on Rain plans, then that someone better come up with the songs to boot. He does, I do not need more words. Of course the main question to be answered is: Does the world need an album like a 1970's Neil Young country(rock) album? For all I know right now, I notice this is just the record I seem to be wanting to listen to. So, yes. More generally, I could have done without it also. I have played my Neil Young albums enough and put one on every once in while for nostalgic reasons. 'On the beach' is the only album I can still listen to any time basically.

Setting the bigger questions aside, then I can state that Rain plans is a well made, well played and sung album. Israel Gripka Nash clearly shows a love for this music. It has a laidback urgency as if these are the songs that had to come out. That should make Rain plans an album that makes a difference and it does. A song like 'Myer Canyon', presents so many different fine details that it is not so difficult to set myself over my first skeptical ideas. The same goes for the title song. There are so many fine flowing guitar lines in this song that it is impossible not to take a shining to it. The song is long with these slowly shifting moods. Just very well done.

Time will tell whether Rain plans will grow on me more. It has the potential to do so as there are several very fine songs on this album. And it is not Neil Young. Strangely enough that sort of helps also. For now any one who is a fan of west coast country rock should give this album a spin. Just open yourself to something new and at the same time so familiar. You might actually be surprised in a very pleasant way.