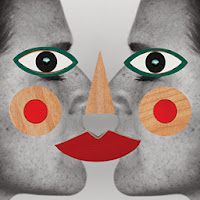 A cover that graces the world of man and the world of fantasy, even if the last part is made up out of building blocks and empty space, suggests something not average, not out of the ordinary. Emiliana Torrini already had my hopes up before I had heard a note played. And listening to Tookah again and again, being intrigued and pleased, it's about time to admit that she delivered on this promise.

Emiliana Torrini is, believe it or not, of Icelandic decent, with an Italian father. She already has a whole career behind her, that I missed every note of. Tookah is my introduction to the Icelandic singer, who for over a decade lives in London. Iceland is known for its legends and vulcanic landscape. Something of this mysticism has certainly found its way to Tookah.

The music on Tookah is small, sober and almost hidden away in the background. That is not to say that it is boring as the above may suggest to you. To the contrary. Tookah holds adventure and surprise. Emiliana Torrini may sing subdued, the music going on behind and around her is playful. There is no more than necessary to set the stage and atmosphere. Not very unlike the latest of Goldfrapp, 'Tales of us', where Erwin Zijleman reported on recently on this blog. Tookah walks a thin line between electronics and organic music. Between a cool, mechanic voice and a warm one. She does not really seem to have made up her mind where to go, most likely not wanting to. Both approaches suit her. Dan Carey produced the record in a very balanced way. Modern, slow beats under some distinct 80s sounds with pure, acoustic moments for contrast.

Most songs on Tookah, I found some interesting descriptions on what this word means, have a mystical element. Suggesting there is more to come than there is, more than we can hear. Like there were musicians playing along, just around the corner, that Carey forgot to record. It is also in the soft singing of Emiliana Torrini. Subdued, but with hidden layers of emotion. The sort of mysticism that surrounds Kate Bush's latest records.

Tookah is an album that has to be listened to with concentration. Not much remains of the atmospheric music and melodies should you play this music in the background. The album is over without noticing it at all. Played however on the headset, all sorts of delicate sounds prevail, slowly sucking me into Tookah, song by song. The only way for Tookah to reveal all of its inner beauty. That makes this album one that is not for all circumstances. Enjoy it at the right time of the day listener and most likely you'll find out what I mean.