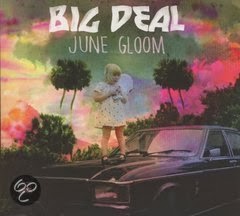 June gloom is graced with a colourful, fantastic cover. A fantasy world with connections to the real one. I recognise everything, but not much is as it is supposed to be. The colours, the girl on the hood. They do not belong. The letters forming the band's name, seem to slowly run away with the icicles in the green cloud. The cover of the cd intrigues, an invitation to get behind the cover. Quite rightly so. June gloom, Big Deal's second album is certainly worth checking out.

Big Deal is originally a duo from London. Try and google them and I got six bands from around the world in different genres and a Dutch cover band to boot. This Big Deal consists of Alice Costelloe & Kacey Underwood and June gloom is its second album. Indie rock and dream pop come closest to describing the music of Big Deal. Right at the start of the album Blood Red Shoes comes straight to mind. The harmonising of Costelloe and Underwood remind me of Laura-May and Stephen a lot. The music is also in line, but played less punky or loud, and far more orchestrated and divers. Big Deal does not play a duo necessarily and release the tension regularly. 'Call and I'll come' is far less intense than any Blood Red Shoes song. There are layers of guitars, bass and drums. So everything from Cloud Control to REM come to mind, in a pleasant way.

June gloom is an album that shows that Big Deal dares to go for extremes. 'Teradactol' rocks out 100%, except for the very little pieces in between, taking opposites to the max. The singing remains subdued, dreampop like, while the guitars and drums go full out. That makes an inner contrast within a song twice. 'Pristine', that follows 'Teradactol', is an acoustic guitar, one voice, all drenched in echo, song, making a huge contrast again. This way Big Deal keeps setting the listener on the wrong foot, forcing him to listen more intensely. At the end of June gloom the band relaxes again and shows more of the indie singer-songwriter side of Big Deal. Slow, just an acoustic guitar and the two voices of Alice and Kasey. Both sides of the band convinced me as being authentic and true. Not completely original, but certainly an addition to what currently is on offer. Cloud Control's latest, 'Dream cave', is up one notch, but June gloom is just a fine album, with not much missing in quality of songs, diversity and intriguing duo singing.

Is all well? Well, no. 'Pillow' starts off very exciting. The guitar line and the chord progression in the background are well chosen. A little spooky, there's a definite tension building up. Unfortunately 'Pillow' does not deliver. The moment of release does not really come. It just sort of fizzles out. There's one attempt to build the tension further, but not fierceful enough. It can't save the song. The good side is, there's a great beginning!

On the whole, June gloom is an indie album that is worthwhile checking out. Costelloe & Underwood are a duo that are obviously comfortable in singing together. They find ways to wrap their voices around each other and lift songs up. A perfect album for some of the darker, rainy days of November. It underscores the weather just perfectly.