From here to now to you. Jack Johnson 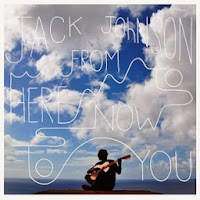 It must be close to 10 years now that I came home with Jack Johnson's debut album, with these songs that were a perfect mix between relaxed aloofness and melancholy seriousness. Jack Johnson the surfer dude from Hawaii made an impression straight away. Since then Johnson went in and out of favour of the larger audience, especially through his hitsingle, 'Sitting, waiting, wishing'. What followed was an album for kids and a few albums that were somewhat more serious of tone, as if clouds had found Hawaii or Johnson. Perhaps both. In 2013 comes a new album, his sixth regular studio album, his tenth not counting live albums but do count filmscores.

From here to now to you is vintage Jack Johnson. The album has all the ingredients that made me listen to him in the first place. The relaxed mood, the clear sound, the percussive from of playing the rhythm and his fine voice, that's including the harmonies. I knew enough just by listening to album opener 'I got you'. This is going to be just fine. The song is slow, sort of dragging behind the beat and the harmonies are in all the right places. The more up tempo 'Washing dishes' gives the listener not only variation straight away but also a great song. Johnson wrote another very smooth going song, that sort of always seems to have been there.

No, there is not one single new point of view or clear development in sight on From here to now to you. As long as the songs are as pleasant as the twelve songs on From here ... who cares? I rather have twelve songs that are very pleasant additions to Jack Johnson's oeuvre then twelve forced tries at doing something different or radically new in an unsuccessful way. This would only be different if the current songs on display would be weak or totally uninteresting. The collection on From here to now to you is all but that.

Something that also does not change is the accompaniment of Jack Johnson's band. Adam Topol is on bass and Merlo Podlewski is on drums. "New" addition Zach Gill is there delivering everything with keys and harmony vocals. His part to the sound of From here ... is a bit more modest as the album is somewhat bare, but as always very clearly produced. Every guitar note is prominently heard, as is Jack Johnson's voice. All else is background and supplemental to Jack Johnson. At the same time there is this balance that makes all Jack Johnson does shine just a bit brighter. The accents going on in the background from his rhythm section may be soft and subtle, they are where they should be.

Another great song is 'As I was saying'. It is a song that has that Jack Johnson dichotomy in optima forma. The song is clear sounding, suggesting happiness and tranquillity. The melody and singing suggest concern and doubt. 'As I was saying' is so subtle. The steel stringed acoustic guitar that has a few playful, extra strokes here and there. The sparse, single piano or melodica notes of Zach Gill. The rolling drum fills. Together it makes a beautiful song. When all this happens again on 'Ones and zeroes', the album only grows and grows.

From here to now to you is a return to form is my opinion. Not that I disliked 'Sleep through the static' or 'To the sea', I just did not think the albums special enough to truly like them. From here to now to you does have that quality. It's always nice when one of the artist I like delivers. Jack Johnson does just that here.