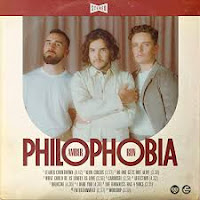 Philophobia, I had the impression that it was something made up but definitely with a Greek undertone. The latter proved true, it means the fear of falling in love. In specific circumstances it sure is understandable. In general I would not recommend it. The tough thing is staying in love and that certainly takes two to manage.

The three gentlemen that make up Amber Run have made the topic the theme of their third record. That makes it a concept album, I'd say, although the word is avoided in the bio. Too 70s? Who cares, it is about the music in the end, because no matter how interesting the lyrics, if the music isn't good, give me a good book any old day. So Philophobia it is.

Amber Run is a trio from Nottingham in the U.K., lead vocalist Joe Keogh, bassist Tom Sperring and keyboardist Henry Wyeth. They met in school, started a band and here we are, three albums down the road.

It is Wyeth who opens the album with a piano. It goes in and out of sync with the rhythm he created at the start. 'Leader Countdown' starts off with an irregular countdown, making it totally unclear what to expect from Amber Run. It has absolutely nothing to do with what comes next. The abrupt ending and start of the commercial britpoppy rocker 'Neon Circus' makes for a change indeed. I am back immediately with Suede mach2. When Brett Anderson and his bandmates created the ever so suave rock that became their signature sound. Amber Run knows its way around this sort of music as well. The piano disappears to the background and the guitar moves to the front.

Another name that comes forward is Keane. Coincidentally Tom Chapman and friends recently returned after a hiatus of several years but I haven't bothered listening yet. The first bunch of hits are enough to last me a life time.

So how is this with Amber Run? I find myself somewhat ambivalent towards this album. On the one hand the songs are obviously alright. There's no trouble to name a few dozen influences that found their way into Philophobia, but the band did alright with them. I can as such not find a lot at fault with most songs. Perhaps a few keep hanging in the mid-range ballad sphere too much, but that's not a bad thing in itself. Enter Saybia or Half Moon Run, enter 'I Dare You'. It is the other hand that bothers me just more. Amber Run is following the likes of Imagine Dragons and Bastille just a touch too much in the rocking songs. Logical, as they are huge bands, but a bit of a shame because Amber Run's songs, at heart, seem better to me. There's even an Avicii touch when 'Carousel' burst into full bloom and Duncan Lawrence in 'Affection'. It makes the flow of the album hard to follow for me.

When all is added and subtracted I still can't make up my mind really. This will come to mean that I will most likely not return to the album in the future. Philophobia after all? On the good side, I certainly had a few good moments with Philophobia. Things could be worse.