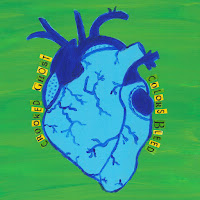 In my review of Crooked Ghost's album 'Skeleton House' I already mused that I was surprised that this was an American band. On it's new EP released this week that wonder has not changed. Except for the spelling of the word colo(u)r there is not much American about Colors Bleed.

The EP opens with a down and out ode to Morrissey. The discontented trills in the voice of singer Ray Lark emulate His Mozzness quite accurately. The song is murkier, darker than The Smiths or Morrissey solo ever came up with. The influence is there out in the open though.

Colors Bleed allows Crooked Ghost to experiment a bit more than on the LP. That sets this release apart from the main body of work, which as such is a good thing. 'Sinew In Red' and 'Golden Blue' are études in soundscapes and shredding that may one day be turned into a full-blazing song. Both have lyrics and especially the latter returns to the song format. Yet, it remains rough and unpolished, giving the impression that it is not fully finished. I do see a great anthem to end a set with, before the encores. 'Golden Blue' allows everyone in the band to go full out at eardrums splitting levels. Lasting over seven minutes it does give full opportunity indeed.

The final song, 'Bright White Noise', brings the band back into the song format for real. Adorned by a female vocal, the song speaks in volumes to the emotions of the listener. The guitars shred away underneath the lead guitar motive that goes round and round underneath the song. There are no more than two chords, but they are enough to sing about "My life's big love affair". It does not seem to have ended well, listening to the musical tears flying around.

Colors Bleed is an interesting new piece of work by Crooked Ghost. Following up on the welcomely received 'Skeleton House' this band remains one to keep an eye and ear out for.

You can listen to and buy Colors Bleed here: