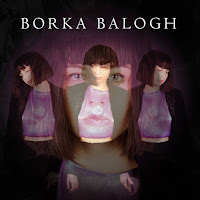 An album by an artist/band I had never heard from before. Borka Balogh is a singer with Hungarian roots living in Amsterdam. On the self-titled album she explores a dreamy side of the pop and soft rock segment. Music and singing bring one band to mind immediately. Not from Amsterdam but The Hague, Earth & Fire and its singer Jerney Kaagman. It's here the similarities also stop as Borka Balogh does not hold any symphonic rock antics.

The music serves the singer at all times on this album. My impression is that the vocal melodies are always leading. It is the music that follows. Together they create a sort of musical dream world. What sticks out though, this is not a rosy dream world driven by an urge for escapism. For that this world is too dark. Unpleasantness and uncomfortability is a part of this dream world. Confrontation is a part of the whole as well. Here I hear similarities with the music Elene May has made on its latest album, 'Veggie Patch In The Desert'. Borka Balogh and Elenne Klok share the same way of vocal delivery as well (not to speak of the covers of "Veggie Patch" and Borka Balogh's first album 'Traces Of You').

All together 'Borka Balogh' has led to almost irresistible listening in the past weeks. I'm not writing that I'm listening to brilliance, what I am writing is this album is simply beautiful. Without a need to force her music in any way, it stands it ground. The only exotic element is the Hungarian (at least I assume it is) singing/chanting in the opening song, 'Gone'. Also one of the songs with a full band sound. Very often the music catches me simply by an acoustic guitar and atmospherics around the voice. When the band joins, the guitar riff in 'Gone' is attractive immediately, it adds to the quality of the song and album.

The strong point of 'Borka Balogh' is that the songs do not need the force of drums and a firm bass to stand their ground. A few notes on an organ carry the intro of 'Nostalgia'. They may sound familiar, but do the job. The song could have found a place on Para Lia's debut album 'Soup Bubble Dreams', the outcome would have been so much different. The difference between what more can I add to impress versus what more does this song need to be complete? Both excel in their own way.

'Borka Balogh' is an album that has found a fine balance between atmosphere and force. Where the force mostly is something one can imagine being added, while the songs are more than good as they are. An album for the young and the old dream rockers.

You can listen to and buy 'Borka Balogh' here: