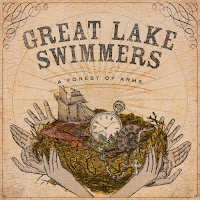 That took a while, before I decided to write about A Forest of Arms. We had no click at first, this album and I, but over time we have come to an understanding that benefits us both. The album gets played regularly and I am enjoying large parts of it. Isn't that what they mean with the Dutch word "groeialbum"? An album that sort of grows on a person over time. Sometimes from good to extremely good and sometimes like this one: from nothing to a lot.

Great Lake Swimmers featured on this blog before. 'New Wild Everywhere', the band's previous album, received a review in the starting days of this blog, in 2012 (read here: http://wonomagazine.blogspot.nl/2012/05/new-wild-everywhere-great-lake-swimmers.html). It took Tony Dekker's band (by coincidence in about an hour, while writing, I'm going to watch a band fronted by another Dekker, Rens, in Leiden during the pre-3 October festivities, Flopsband) quite some time to come up with a new album. Some minor research shows that Dekker released a solo album in 2013 and worked for World Wild Life on environmental projects. And so 3 years pass by before the swimmers get a chance to peruse the great lakes once again.

The waiting was worth it. Again much of the music is soft spoken, with some eclectic elements. If I'd made things easy on myself I'd label the music new folk, but I'm not that kind of guy, most of the time. Great Lake Swimmers goes beyond all this modernity and dips its toes just as easily in that sea called the Eagles (Tony Dekker even sings "When hell freezes over" in 'Don't Leave Me Hanging') or the softer side of Neil Young and all things Laurel Canyon in the 70s. All the elements of neo folk are chucked out of the window and in move a battery of strings, just like they did in the 70s.

One song like 'Don't Leave Me Hanging' is enough for me. 'One More Charge at the Red Cape' is a more upbeat song. Diversity is what makes A Forest of Arms a strong album. The strings together with the fingerpicked notes on the electric guitar give the song a bouncing quality and when the hand claps join in '...Red Cape' even becomes a floor filler. The Papa John Creach like screeching violin solo at the end finishes things off in an excellent way. Great song.

The modesty of Great Lake Swimmers is what on the one hand endears but on the other may stay in the way of a major breakthrough. Time will tell. Fact is that the band has found its voice and is relaxed in what it does. Which it does extremely well. At the same way Great Lake Swimmers is not afraid to let in some influences in a recognisable way, without giving up an inch of its own sound. 'A Bird Flew Into a House'? The title gives it away and it is not 'Our House'. The Byrds are paid homage here. It's in the way that Tony Dekker sings, end lines of his lyrics, as well as in the Rickenbacker spacey guitar lines (hidden away) in the mix. The banjo makes it an original song.

One of the extremely pleasing features of A Forest of Arms is the violin of Miranda Mulholland. Not unlike Scarlet Riviera's on 'Desire'. Although Mulholland's playing is far less prominent and more supportive, the effect on several songs on the album is the same. It gives them a distinct flavour that colours a song and makes them stand out. The same goes for Eric Arnesen's banjo playing. The moment that Great Lake Swimmers grab for the electric guitar, e.g. in 'I Must Have Someone Else's Blues', a song becomes much more one-dimensional. The whistling part is a nice surprise and shows that the band knows it has to come up with a little extra here.

The next song is totally minimal with brushed skins and a piano playing minimal chords. This band keeps surprising by the song. Totally subdued 'The Great Bear' is, neat and quiet as far as music goes. Relaxation is the word to describe A Forest of Arms. Very little happens. It's all about following the nuances in this music. My guess is that at first listen I was not in the mood for an album like this and dropped out. Luckily albums can come by again at a later stage. As I already wrote, things turned out just fine.

You can listen to 'I Must Have Someone Else's Blues' here: