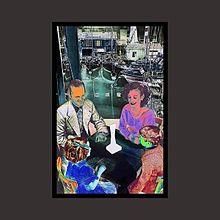 For the past nearly 40 years I've only read one thing about Presence: "This is Led Zeppelin's worst album". That was the main message. It was the first one I ever heard a song from, not being a single. My recollection doesn't go much further than that. If I have listened to Presence more than once through the years, I'd be super surprised. So here I go, as I am reviewing all the Led Zep albums now that they are re-released for the umpteenth time. I stick to the original songs.

Presence followed 'Physical Graffiti' (1975), an album that had it been stripped down to the bare essentials, may have been as good as what went before, but as a double album was far too much for me and not of the quality I was used to by Led Zeppelin. Presence is an album with a lot of guitars on it. Back to basics almost. This is explained by the fact that Presence is less of a group album, due to the serious injuries Robert Plant had incurred after in accident on Rhodos. Page joint him while convalescing and together they wrote the album. Only for the recording were they joined by Jones and Bonham. Plant was still in a wheelchair when they recorded the album in the studio in Munich where the Stones would follow them to record 'Black and Blue'.

Listening to Presence for the first time after so many years, I can't find much wrong with the album. The guitar work is what is expected. The rhythms are at a level of complexity for a blues rock band that are a delight to follow. Robert Plant stays away from the sort of songs in which his singing turns into a whining and/or are too monotonous. What Presence does not always have is the depth that several songs on the previous albums had. That spark of sheer inspiration seems to be missing, the glow that simply comes off many of the older songs. In that sense Presence presents us an empty cask. Led Zeppelin had done these tricks so much better.

Having said that I think that many a band would have given it's Les Paul and perhaps a leg too, to be able to come up with an album like Presence. Led Zep rocks here in a very elementary way and succeeds. Stripping off all the excess instruments and eastern and folk influences, we hear the band in its rock (and blues) essence, like on Led Zeppelin and Led Zeppelin II. And I like this essence I notice.

'Achilles Last Stand' is the 10 minutes plus monster song Presence opens with. It takes us into familiar Led Zep territory straight away. Jimmy Page opens with some finger practice on his guitar, before a double tracked riff is laid out under which Jones and Bonham lay a fierce rhythm. There is nothing much against the song, but nothing much in its favour as well. It is a typical Led Zep song. The same goes for the songs that follow. 'For Your Life' has the stop-start guitar and drums. The playing that gives the music of this band so much air and space. I can't refrain from commenting that it also gets on my nerves when I hear it too much. When at its best, as in 'Kashmir' I'm totally in awe, but not all songs are that good. 'For Your Life' is quite o.k.

'Royal Orleans', the only song credited to the whole band, I can be very short about and not just because it's the shortest song on Presence. A song that this band played better many times before. Nice at best.

The best track on Presence is 'Nobody's Fault But Mine'. In the song Plant does a little of his eastern singing with Page following him on every note on the guitar. When the band kicks in, 'Nobody's Fault But Mine' turns into a fierce rocker, with the Led Zep signature stop-start rhythm. In the mean time funny things happen with the rhythm and Plant spices the song with a killer harmonica solo. Nothing invalid about that solo. Again an elementary track with nothing much more than giant overdubs of guitar parts. Page lost some sleep over that, but had all the extras down in a 48 hour session or so the story goes.

In 'Candy Rock Store' Led Zeppelin does its Elvis tribute, it seems. 'Blue Suede Shoes' with a more complex rhythm, but straight from the classic rock 'n' roll store and Elvis. The Pelvis will never have imagined singing his songs like this, but there's enough in there to give Led Zeppelin away.

'Hots on For Nowhere' is another song that came by before. A variation of songs that were on a Led Zep album since 'Houses of the Holy'. Nice piece of guitar work with Page showing his chops near the end.

It all ends with a Led Zeppelin slow blues, 'Tea For One'. After a misleading intro that is. Very much reminiscent of 'Since I've Been Loving You', but also very much its own. The kind of song I love to hear this band play. 'Fuck de Blues', may be a funny song, Armand, when blues is played like this, I can sort of hear it the whole evening. Led Zeppelin is many things but deep at heart it is a blues band. An electric blues band that loves to play the music that used to be something alien for white people from the U.K., but mastered in the first half of the 60s as if it originated from the streets around Hyde Park.

That leaves the sleeve. Another Hipgnosis gem. Just look at it. An all American family of the 1950s staring at what exactly? Fascinating.

So what to think of Presence? I was surprised listening to the album. Presence is a lot better than everyone made me think through the years. But for 'Kashmir' I would even write that it is better than "Physical Graffiti'. Led Zeppelin went out to find inspiration and found it in a few songs or was able to recreate some highlights in others. The album does not match the first five albums of the band, but then which album does in this genre?

You can listen to 'Tea For One' here: