Beneath the Skin. Of Monsters and Men 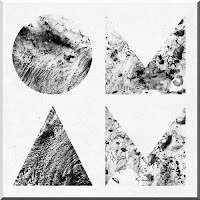 Three years ago Of Monsters and Men were all over NL radio as one of the many "hey-ho" bands. That fun song, 'Little Talks', became a hit and the band toured the festivals for two seasons afterwards. By then it was time to come up with a new album, following up on the one that was nice, but not more than that. Did I write about it? I can't remember but let me check. The answer is no, so I must have not found it special enough at the time to dedicate my time to the album.

So now it is 2015 and Beneath the Skin is here. Iceland kicked us all but out of the European Championship 2016, when writing it's just over 24 hours and we know for sure (they did). They also beat the local musical competition, Mister and Mississippi, with two fingers in the nose. What Beneath the Skin does, is proving that seriousness can go together with a bearable lightness of being. Of Monsters and Men is able to strike a note that brings together both sides by setting despair or melancholy together with a lightness of tone and phrasing that illuminates, glows and dampens, like a simple coloured draping over a lamp.

I simply have to admit that listening to Beneath the Skin impressed me, while I hadn't expected that much of it. Just another "hey-Ho" band, right? Of which we only have about 100.000 something, right? The album proved anything but another hey-ho. Beneath the Skin is as dark as an Iceland winter night and as threatening and as bright as a volcanic eruption. Warm as the thermal baths, cold as winter. Bare as the landscape, but full of epic stories of old. This album holds it all.

The tricks Of Monsters and Men uses musically are very much like Mister and Mississippi's, but there simply is no comparison. Melodically, technically, moodwise, the depth of the vocals, all is at another plane. The band may have taken four years for its new album, the wait was worth every second. (And I wasn't even waiting, that is the good part.) As I already wrote I'm impressed.

There is not much use to pick out a single song. They are sort of inter-changeable without it hindering for a second. One song Nanna Bryndís Hilmarsdóttir sings the lead on others Ragnar Þórhallsson. And then they sing together, always with these undercooled voices. Some songs remain more subdued, others get a full treatment with horns and growing anticipation. It simply doesn't matter. What Of Monsters and Men does, is creating that atmosphere that is its signature. Together with producer Rich Costey the band proves that capturing magic is possible.

You can listen to 'Crystals' here: