In Through The Out Door. Led Zeppelin 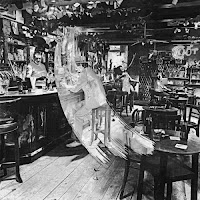 Until this year, 2015, I only had one Led Zeppelin album on vinyl: this one, as that was released in the years that I had enough money to buy albums on a regular basis. In the years that followed I sort of lost my interest in the band, only to be restored after I got reintroduced to the band in the student dorm I lived. Since those days I remained a fan, although this album never gained any prominence. The first five albums remain my favourites. As I tasked myself to reassess all albums, it's time for this one.

Do you know that I had forgotten what the sleeve lookes like? The album was sold in a brown paper bag at the time and the album is still in its original package. A barscene is behind the brown bag, which makes sense if you are from the U.S. Less so when you're from NL though. The same goes for the music at this point in time. I could not name one song from the album, except 'Hot Dog', and just don't ask me to sing or even hum it for you. You are about to read an almost blanco assessment of Led Zeppelin's final regular album therefor.

My guess is that I do not have to explain that In Through The Out Door is the last album before it all came down in crash of booze, pills and powders. Probably something like a lack of true inspiration and will to continue came into the mix as well. Would a miraculous revival of John Bonham, really have made a difference?, is a fair question. Although there is one more album to come, 'Coda', this is the final album of the band. Here we go.

In Through The Out Door starts off with a band in great form. 'In the Evening' rocks like one expects from Led Zeppelin. The riffs fly around, John Paul Jones' organ is very present and Bonham is whacking away in his heavy, lumberjacking style. The stop-start riffing of Jimmy Page and the strong vocals of Robert Plant are present. A great Led Zep song with a pleasant change here and there. What is noticeable also is a harsher sound of the guitar in some places. The influences of punk on the proclaimed rock dinosaurs? Generation conflict in rock if there ever was one. Looking back nearly 40 years later we know who won this race gloriously. In fact there's no comparison.

What surprises me is the second song. 'South Bound Saurez' is a lighthearted song that is almost un-Led Zep like. The piano drives the song forwards, the melody has a pop feel. Led Zeppelin comes close to The Rolling Stones but then years before 1979. An interesting look into what the band may have become had it been able to continue?

The same goes for 'Fool In The Rain'. Latin influences and David Paich keyboards? "I like Pina Coladas"? Led Zeppelin doing Toto? Jimmy Page overdubbed a guitar solo, but they are standing out as if not belonging, nearly a sore thumb. Jones and Plant are in control on this part of the album. Page and Bonham were in physical trouble by then and not always showing up. This severely changed the sound of the band. Is that a bad thing?

The boogie of 'Hot Dog' is completely endearing. Again John Paul Jones takes the lead, this time on piano. Led Zeppelin does a Jerry Lee Lewis rock and roll ditty. Again there's nothing wrong with this song. It's, again, nothing that one would expect from this hard rock monster, but who cares if it is playing with this much fun.

Four songs into In Through The Out Door it is easy to conclude that I am listening to a band that is totally of its little path. Or a band that is reinventing itself? Another way of looking at the album is that the band is having fun with all sorts of music that influenced it along the way, except going back to the blues it came from once upon a long ago. Listening to it for the first time since the lord knows when I have to conclude that I'm surprised in an extremely positive way.

The fun continues with 'Carouselambra'. Jones' new keyboard does a lot of things and the rest of the band picks up on cue. 'Carouselambra' is extremely alive. Rocking, whopping, jumping, jiving. How can it be that I never heard this in the past? For one my musical context is so much larger. There is even a small section in this song that bands like Marillion built a whole career on. This influence is so clear. Led Zeppelin may do a Genesis here though. The song takes many a curve and is close to a masterpiece. Unexpected and very welcome. All 9 minutes plus long.

'All My Love' can't carry Jimmy Page's consent. That may be the single factor why the band never got back together as it is the blue print for Robert Plant's solo career. This song is delicate in its total execution. The drumming is as close to subtlety the role model for Animal could ever come. Jones' work is all telling and Page fulfils his role with some beautiful parts. The new Yamaha synthesizer is doing overtime again. This is a new Led Zep and it is working.

That leaves the final song. 'I'm Gonna Crawl' is a slow, bluesy ballad. With again all this electronic keyboard work going on overshadowing a lot of what Page is doing and I don't mind. His work on the previous two albums were often a bit bland or not outstanding what the level of Led Zeppelin used to be. Plant and Jones have taken control on In Through The Out Door and show that there were many talents within this band. And then comes the guitar solo in this ballad and Page rips it all apart. A great ending to a career.

This listening session just baffled me. This album is so good. It was not what millions of fans probably wanted the band to be in 1979. In 2015 it is clear that Led Zeppelin could have gone anywhere in the 1980s had the band continued. In Through The Out Door may not be a masterpiece but it is very close to one. I thoroughly, utterly enjoyed listening to it today. A swan song if I ever heard one.

You can listen to 'Carouselambra' here: