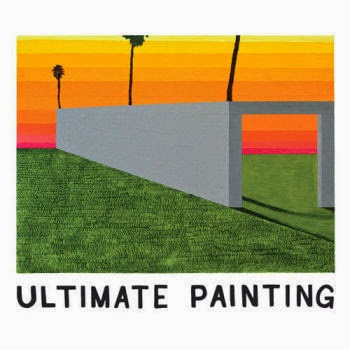 'The Velvet Underground' the utterly fantastic third album of the band with the same name was lauded recently on this blog already. In the review I wrote that the band influenced musicians right up to this day. Little did I know at the time of writing that I was about to embark on writing a review on an album that is quite rightly seen as its grand child. Where Hollis Brown re-recorded 'Loaded', Ultimate Painting just takes off where Reed-Yule-Morrison-Tucker left off.

The first listen session just surprised me. Even the same deadpan singing jokes are in there. The random, deep voiced words that are tossed into the vocals are there, as is the way of harmonising. The two guitars do the same trick and the drumming is just as elementary as Mo Tucker's drumming used to be. The members of Ultimate Painting listened very closely to the real thing and only then started writing songs and after a close re-listen did they proceed to record Ultimate Painting.

The band consists of members from other bands, Jack Cooper of Mazes and James Hoare of Veronica Falls and the Proper Ornaments. (Both have reviews on this blog.) Together they have made some indie rock and pop ballads like they used to long ago, but without shunning a fake drum. Why not as it adds to the effect? 'No more heroes'? no, more heroes, as 'Ten streets' tends towards this famous punk anthem.

Ultimate Painting is not as good as the album it piggybacks on. It may not be possible to be that good. Arguably not even Lou Reed managed that in the end. Ultimate Painting takes the slacker/relaxedness of 'The Velvet Underground' and brings it into the 21st century. It misses the tension and the at times barely controlled madness, it adds some beautiful harmony singing by a female voice. Not to forget some more playful elements that are added to Ultimate Painting, that are unthinkable in the real thing. It equals the sound. It's fun to listen to.

Of course all this can be looked at from a totally different angle. Why release anything like this, after all was said and done in 1969 with the release of 'The Velvet Underground' or 1970 with 'Loaded'? This is a valid question in my mind. Especially as the the duo behind Ultimate Painting aims mostly at effect? The answer is as simple as it is valid: because Cooper and Hoare wanted to make an album like this and had the material to come up with something that has the quality to release.

An album for VU fans, that is probably the best description. Ultimate Painting is not aiming for a large fan base and will be happy if VU fans like me nod favourably to it. Here is the nod, although I'm not cheering by the wayside. Anything more would be a large surprise to all concerned I suppose. This album is fun while it lasts, but is not going to be memorable. That position is taken for the last 46 years, alas. Still very much worth while to check out though.

You can listen to 'Winter in your heart' here: