The perv in perfection. Lucas Hamming 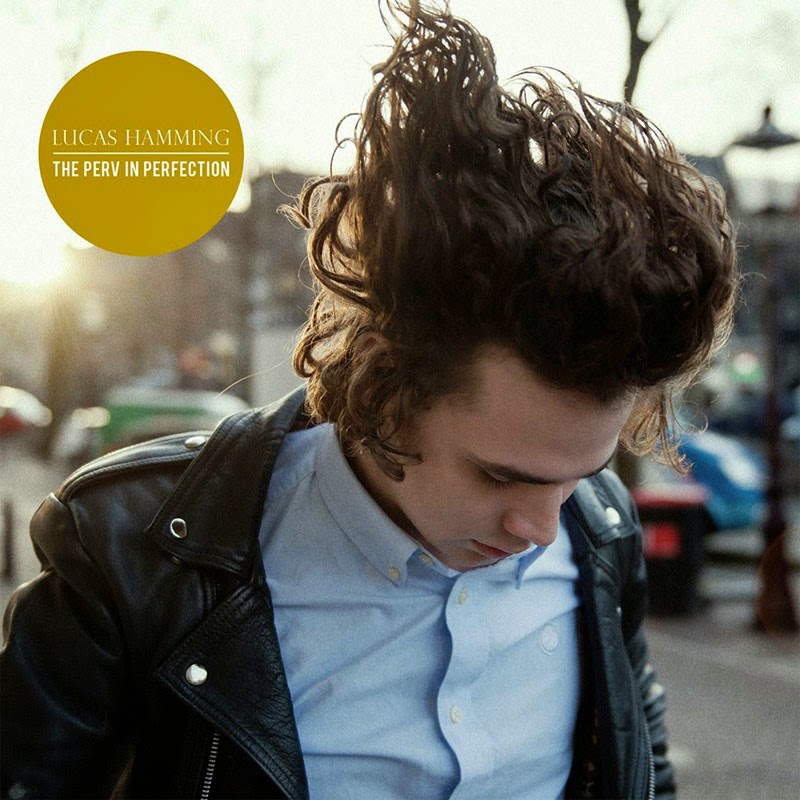 Just weeks ago Lucas Hamming featured for the second time in his short professional career on this blog. His live show with Sunday Sun you can read up on here (http://wonomagazine.blogspot.nl/2015/03/lucas-hamming-live-patronaat-haarlem-19.html) if you haven't already. In April it's already time for the third time. With his EP in my possession I can delve a little deeper.

My impression of the live show comes true on record. Lucas Hamming knows how to write a song in the best indie rock tradition and is able to give his songs a twist or two as well. Never a dull moment with the five songs on The perv in perfection.

For over a month Lucas Hamming's single is on national radio. 'Wood from the trees' is a good song, but not one that I'd expect to hear on the radio. For that it is just a little "too difficult" in my opinion. Too loud perhaps also, but then, when Foo Fighters delivered the best song of the 00s, 'Wood for the trees' should not pose a problem for 3FM listeners. What puzzles me is that a lot of good, to my taste, great songs are regularly played on 3FM, but never chart. That is for the dance, R&B and whatever it's called. Bit weird? Yes.

Lucas Hamming is not afraid to rock out and use up the whole sound spectrum at his service. The perv in perfection has a wide sound without becoming bombastic. Hamming has the same spunk as the young David Bowie of under 25 and melts Led Zeppelin rock with a pop element that makes his music somehow irresistible. Loads of influences shine through, while at the same time this is all Lucas Hamming. He dares to sing full out, no bars held back and gives the music his all. A great combination.

Perhaps Lucas Hamming is too over-confident. Time will tell. For now he's young and (perhaps) innocent and allowed to be enthusiastic like you know what. With great horns or an organ at full blast his songs are pumped up to the point of bursting and he gets away with it. Because of his youthful exuberance. It's what makes the songs on this EP so much fun. It's only five songs, yes, but five songs at a great level of musical creation.

Single 'Wood from the trees' has a pounding rhythm, a sort of call and response that lets the tension escape. Not to forget the ooh-oohs and harmonies. A lot of thought went into the details of this pop rocker, showing straight away that The Netherlands has a new talent on its hand. One that is not afraid to shoot up into Mika heights to. Strangely enough I find that there's more of Mika on this record than I'd ever expected to find.

'Mojo mischief' is more riff ridden. A less original song, but if we listen to the horns and the changes in the mood of the song. Led Zeppelin meeting the Earth, Wind & Fire horns? Something like that it is. So 'Mojo mischief' is an even more impressive song than the single. Man, I just love it.

'Saving grace'? Yes, Foo Fighters, but also an influence larded with a poppier vocal melody and harmonies. Something Dave Grohl c.s. couldn't create for the life of them. Again some great singing and enough of fun variations in the music to make the song interesting to listen to.

'Leather jackets' pushes the brakes off again. A slicker song than the other rockers, but up-tempo in a tremendously pleasant way. The lead guitar notes that lead the song on are well played and give 'Leather jackets' its pace.

The title song has a keyboard as its main feature, filling up the space. Giorgio Moroder groovy pulses in a rocker? Why not. Again a very strong switch from verse to chorus, without being overly obvious. Something to get used to and grow into. There's even a violin in there. Lucas Hamming did not have to nibble on his budget for this EP. His debut was allowed to make a statement straight away. He kicked the ball right into the net. No worries there.

So another talent from NL. It's starting to become a bit boring really to write, but not to listen to. With a record like The perv in perfection I don't mind hanging out the white flag again. I've surrendered, totally.

You can listen to 'Wood from the trees' here: