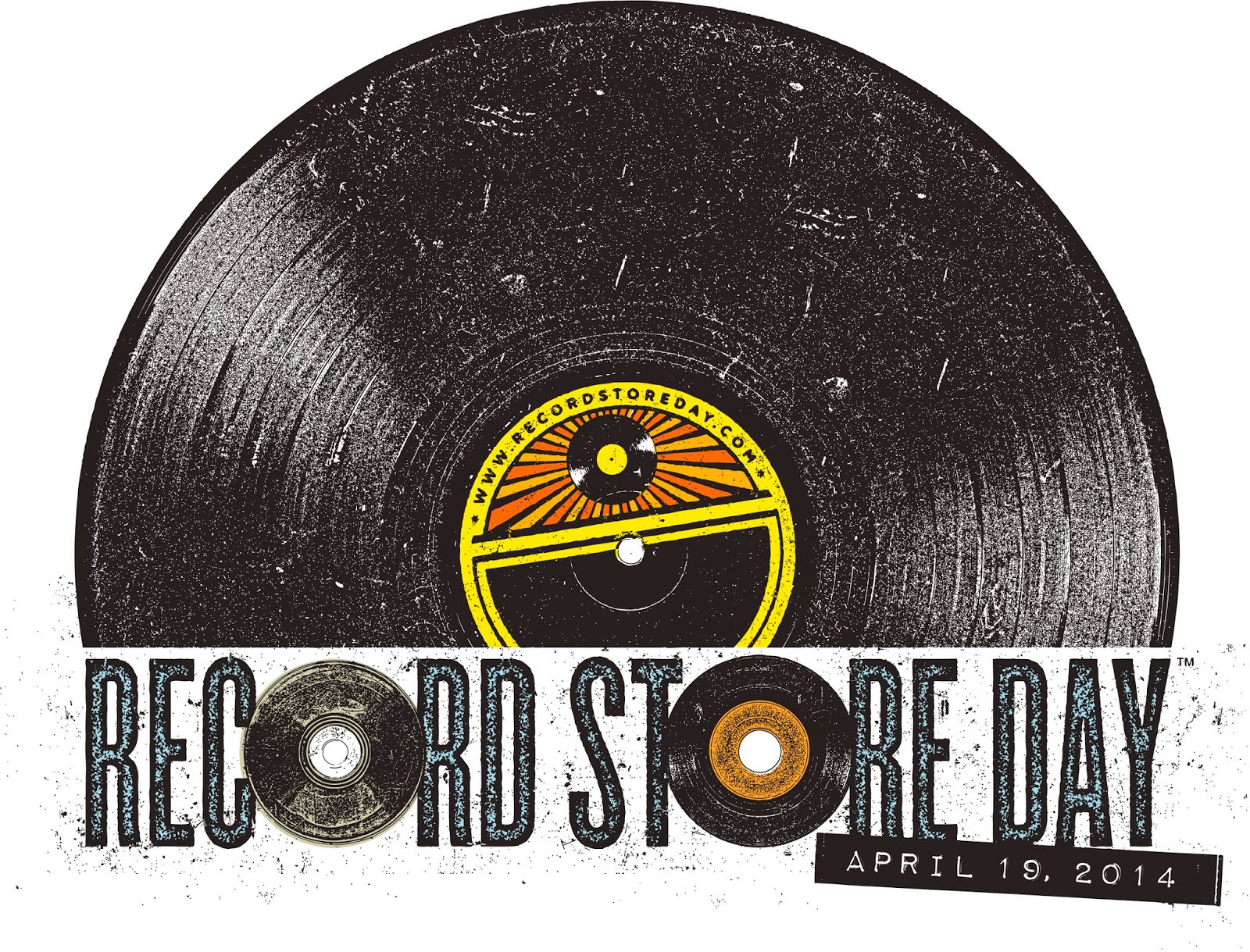 Record Store day, that yearly phenomenon to celebrate that record stores still exist. Against all modern odds. My exclusive 7" single has already been reported on on this blog (http://wonomagazine.blogspot.nl/2015/04/three-glorias-bonnie-prince-billy-and.html). Nothing beats a record store (or book store for that matter). The browsing around, feeling a record in my hands and trying it out? That last part is totally unnecessary in 2015. When I buy a record these days, I know exactly upfront what I'll buy and why I do that. Talking of the main difference with 1980 or even 2007, it is that, next to the volume of what I buy. That certainly has lowered.

In the afternoon of 18 April I had just walked in to a packed store, Plato Leiden, when a lady with a magpie on her shoulder walked in. Fairly soon after I realised that I ought to know her from somewhere. And I did: Ellen ten Damme, a Dutch singer who specialised in German songs in recent years. Like many other artists this Saturday she was touring the country for instores, often ending with a regular gig somewhere. Being there to buy 'The Miseries' album, the acquaintance with Ten Damme's wasn't a 100% pleasure. Her songs were alright, but the need to explore the higher regions of her vocal reach, were well, horrible. Screeching, shrill and beyond what she ought to try. At least in a record store with limited technical vocal assistance. I left with a bunch of stuff that must have made Plato happy and a buzz in my ear.

The compliment was repaid that evening. Plato Leiden, Velvet Leiden and Gebr. de Nobel organised an afterparty with six acts, that played alternately on the large and the small stage, so that it was possible to see all acts, except that I left before the last one. Having ordered the tickets on line, I found at the record store in the afternoon that a discount was provided if I bought anything that day. I had and got a free beer instead. Great service Gebr. de Nobel!

The evening kicked off with Glossy Jesus, a band no stranger to this blog. The foursome played a very decent gig. Its Joy Division meets Alice in Chains vocal foundation is painted over with The Beatles harmonies and at times chord progression, sympho changes within the songs and new wave or Britpop guitar and keyboards strokes. In some songs the one element is more prevalent, in others another element, but nearly always the song doesn't surrender itself in just one go. The listener has to make an effort. Again Glossy Jesus won me over, through the quality of its playing, enthusiasm and probably mostly the harmonies. For the finale Dutch writer Nico Dijkshoorn was asked on stage to play the lead guitar. F@#$, the guy can not only write and recite in a cool way, he can play guitar too. A promise: I will check out the album soon. So who knows, a review next month?

Next off was Sue the Night, one of the bands that were in the top 15 likely to break in 2015 in 'Oor'. Stating upfront that Sue the Night doesn't make the sort of music that I truly like, the gig was o.k. and the top 15 position is a deserved one. It started with a mysterious song, in just as mysterious lightning and mist. The violin played a prominent role. The mystery wasn't kept up though. For most of the songs by Sue the Night goes that somehow the songs don't resonate within me. I can't explain why, it's just a fact. I had noticed it when I did my assessment of the top 15 in January and it did not change live, which at times happens. There's something lacking, for me, where I do hear that it has nothing to do with the playing on stage or the voices. So I noticed the cool old fashioned jazz drum of the drummer, the equally cool electric guitar of singer Suus de Groot instead. It all ended with the almost hitsingle 'The whale'. Familiar, but with the same restraints on my end. We do not match.

And now for something completely different. Green Hornets blasted a whole truckload of garage rock into the room. Another band that has f@#$ all line up: drums, organ, guitar or two guitars or a harmonica, but no bass. The riffs just split the room. The guitar amp was so loud that the other instruments were killed, even through the PA. So I moved backwards where the sound slowly improved, the fun grew and the organ solos would have killed the likes of Wilson Pickett and Otis Redding. If only they had known. The possibilities of this kind of music. The Groningen based garage rockers simply floored everyone including themselves. The tall, long-heard, bearded organ player had his sixties organ simply so low that he had to bend over to play and sing, harmonies or lead. The further the set continued, the more he sang. Not better, but things certainly got even tighter. Simply party time. 30 minutes would have been enough for me though, 40 minutes we simply too long.

Back to the main stage. Limburg's pride Afterpartees were set to go. It all started with a prank. A song that I'd simply hoped never to hear again, 'Saturday night', by Showaddywaddy (?) -I'm not even looking it up- started playing. Only to be shown in a devastating way how Afterpartees take care of a Saturday night. A singer with an endearing attitude, two super tight guitarists and a concrete foundation. Jokes, inside jokes, prying the front row and dancing: the band scored on all parts, but mostly with its music. Afterpartees, a band full of teenagers and an older (looking?) drummer, played a bunch of punk and garagerockers that made me dance through the whole gig. It even makes me go back to the album, which I had dismissed at first listen earlier this year. The only dip was the slow song, Pretty Things style. The central riff was just too sought after, too difficult, not fluent. Speeding the song up half way through did not mend this. A punk cover and a great rocker as a finish made it all come out alright. Afterpartees have a well deserved spot in that 'Oor' top 15 also.

Walking into the small stage again, the audience was treated to '(I bet you look good on the) Dancefloor', still the greatest rocker Arctic Monkeys ever produced. Up that, I thought. It was, in the most energetic way. Not so much in quality, but in pure energy.

My final act was The Miseries. Tim Knol in a new identity: garage rocker. The kind of songs The Miseries play are not known for their length. When you speed that up then nothing is left. In 25 minutes all songs were played, including 20, 30 second outings,and the band left the stage. They played so loud that singing words could have been skipped. One big mess of noise and still things were very much o.k. Where with his solo work I always thought, mwah, with The Miseries I'm totally happy. Its songs are wild and exciting, the cover, 'Sorrow', played in a swinging new way and the proficiency of the players is more than alright. Add the great vocal harmonies to that and we have straight A here. As far as I'm concerned The Miseries is a great move, Tim. Overall I can't tell yet, but that one's not up to me. After 25 minutes of  sonic turmoil I decided I had enough. It was time to go home.

Another great song I was remembered of this evening? 'My generation'. Total brilliance by The Who. Sometimes one just forgets.