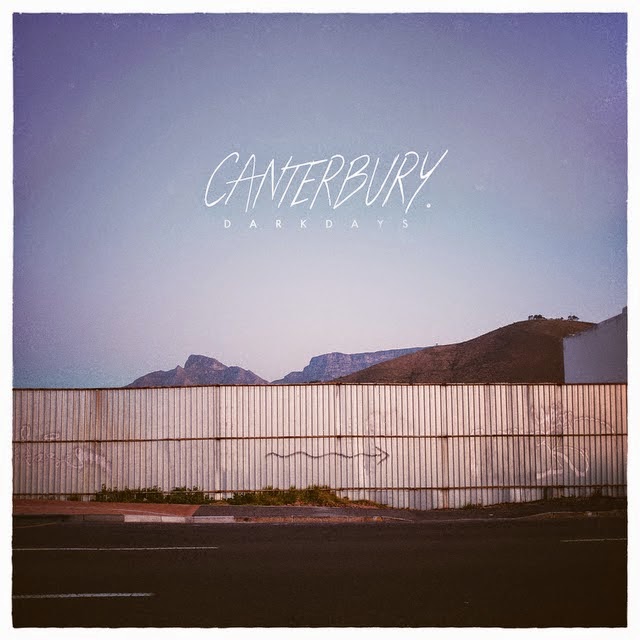 In 1976 I visited Canterbury for the first time. Although it must have been fascinating, I just don't have that much recollections of this bunch of old stones, which must have been the way I viewed the cathedral. Although something about the ages and history set in. The running gag of this holiday with parents and family was upheld in the cathedral also: x fell here, in this case Thomas a Beckett. My relationship with the cathedral changed over the years.

Now there's a band called Canterbury. A band for some reason so obviously British, that the way it plays U.S. rock, prog and even some punky elements, is outdone by the way I can hear several of these songs being brawled in the pubs of the U.K. late at night by an inebriated audience that has to but does not want to go home. "Out, out", shouts the publican, but all he receives in return is "We are, we are the broken" as 'Expensive imitation' is put on again and shouted along to. The next line is easily mistaken for a request for another shout: "We're bound and bind and stolen". Let's make that a pint, mate. "Expensive imitation" starts in total silence, then an intro of a psychedelic outing in reverse, before it develops into something resembling the work-up to the end of The Beatles' 'A day in the life'. An orchestra going out of bounds.

Canterbury is from Farnham in Surrey where the band members started playing together while in highschool. Presently four members remain: guitarist and vocalist Mike Sparks; bassist and lead vocalist Luke Prebble, guitarist James Pipe and drummer Chris Velissarides, who was added to the line up in 2013. Dark days is the band's third album after 2009's 'Thank you and calm down' and 'Heavy in the day' released in 2012. It is my first Canterbury album.

Canterbury makes music that usually is not my sort of music. I'm not one for the American alternative rock bands. Whether Pearl Jam, Soundgarden or the more punky, angry shouters, a few songs is alright, but after that I have to put on another album and certainly band. There is also a mood over the album that reminds me of a band like Flying Colors, which I also liked, somewhat to my surprise. There is a minor prog element in the music of Canterbury. What makes Dark days more attractive is that there is another element. Call it the Oasis factor. Canterbury knows who how to write a song and adorn it with an interesting melody. That the songs are played loud and are presented in a broad scope, doesn't matter. It's even irrelevant, as most songs, no doubt, will hold their own when played in another setting.

Then there are all these fun details. The accents played high on the cymbals in 'Expensive imitations'. The chorus and lead guitar in 'Satellite'. The way the intro of 'Hold your own' detonates with everything that went on on Darker days before. Canterbury is not afraid of doing something different as well. The bands that do not allow themselves to be captured in one corner are the ones that usually are the most interesting. Not that all songs on Darker days are that good. The Toto like 'Think it over' is not exactly my cup of tea, but the best Toto songs are good, just not really my favourites. And again these small details with these little bells sounding in the background.

'By the trail' starts with an acoustic guitar. A real rockballad and my Mister Mister, Cock Robin, Foreigner allergies started playing up fast, but to my surprise a song unveiled itself that has the right melody, horns kick in and there are even the unavoidable violins, but I lived to tell. The singing is good, why not an a capella ending? It's all there, making Darker days another notch better. Something 'Elephant' also does. The chorus is a trick I've heard many times before, but it doesn't matter. The chorus is just fantastic. And, dear reader, we are only at song 9 into Dark days and I'm still having the greatest of times. So who cares what happens next? This album can't do wrong anymore (and doesn't).

Dark days is not my album and at the same time totally is. It's nice when an album surprises me, takes me by the inner ear and on a musical trip past pastures unsuspected. Always listen first and then judge. Sometimes that is hard, but it is the only way to have unsuspected beauty revealed or discover new favourites. Dark days by Canterbury is one of those albums that underscores this truth.