Happiness is. Taking Back Sunday 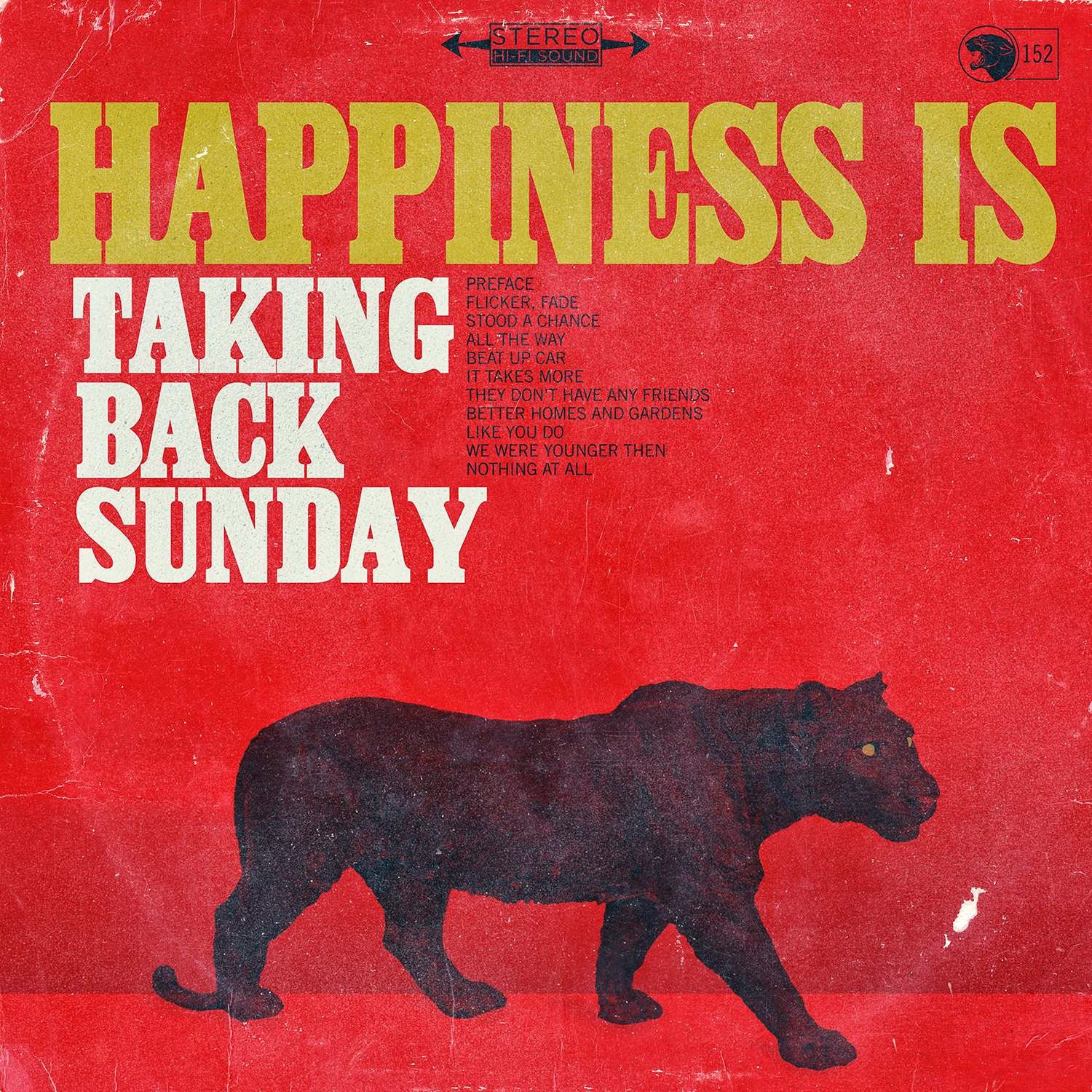 Another band that I have never heard of. Taking Back Sunday is around since 1999 and has released six albums since 2002. These things happen and I have to say that the introduction to the band is quite a pleasant one. The sleeve looks like an album from the late 50s, with a panther totally out of place. Put back pat Boone, Frankie Laine or Doris Day and your there. For the rest a classic sleeve. The music is like one can expect from an alternative U.S. rock band. Loud, enthusiastic rock with enough variations to be instantly interesting, some fun to great melodies and harmonies with guitars all over the place. It is plain, good old rock fun that Taking Back Sunday offers.

Taking Back Sunday is a five piece band. Eddie Reyes plays rhythm guitar and plays in the band from the start. John Nolan plays lead guitar and keyboards and sings. He's also a founding member but quit the band between 2003 and 2010. Adam Lazzara is the lead singer since 2001, but plays harmonica and additional guitars as well. Mark O'Connell is the drummer since 2001 and Shaun Cooper is on bass since 2010. The band is mostly mix of members that were around from before debut album 'Tell all your friends' and a few that decided to come back for the fifth album bearing the band's name.

When listening to Happiness is for the first time, I knew straight away that this was a review kind of cd. Listening closer I find it hard to come up with an original angle. Happiness is this good old American indie/alternative rock album. There is forceful playing, although 'Preface' with its violins is totally out of place and has little to do with the band as such I guess. 'Flicker, fade' that kicks in loud and with some major drums and cymbal pounding, is a statement. The song is a mould for all else on Happiness is. Loud guitars in that familiar, close to keyboards sound. Massive and loud. Over that there is half-shouted, but very melodic singing, with harmonies in all the right places and extra vocals as well that come in and out of the mix. The vocals as an extra instrument as it were.

Most songs on Happiness is have these characteristics. Some are somewhat better than others. 'Stood a chance' reminds me of Social Distortion, but at the same time has one of the more poppy melodies. Again Taking Back Sunday finds the room in its composition to add an extra chorus within the chorus. This is the best way I can explain it. And that is just very well done, as it takes 'Stood a chance' to another level.

Musically Taking Back Sunday reminds me of everything from Aerosmith to emo bands (the latter mostly because of the way of singing), but also Fountains of Wayne is not terribly far away, though FoW is much more perfect pop song oriented. Of course there is more, but this list goes to show that the list of bands that I'm reminded of is long and varied.

Happiness is is varied. Songs like 'It takes more' is more than just a straightforward rock song. The rhythm is different, the song breathes as there are distinct holes in the mix where the wall of guitar sound is missing in places. When they appear in the chorus, with the multi-layered vocals, it creates a dynamics in the song that allows the album as a whole to grow. Producers Marc Jacob Hudson and Mike Sapone have created a sound that sounds very natural and is at the same time forceful. "I'm not angry", Adam Lazzara sings in 'They don't have any friends'. This is what perhaps surprises me on Happiness is. There is no real teenage angst relived as thirty something. It is this lack that makes the album so much more interesting. The break-up pain of 'Better homes and gardens' is mature and well made. "I'm not anything at all", is the line after "I'm not angry". And that, dear reader, is a wrong statement, as Taking Back Sunday may have everything in their hands to have a successful career. There are a million bands like Taking Back Sunday, most are either angry and/or boring. The difference, to me, is in the melodies and let that be the element the band scores quite well on. Need I say more?