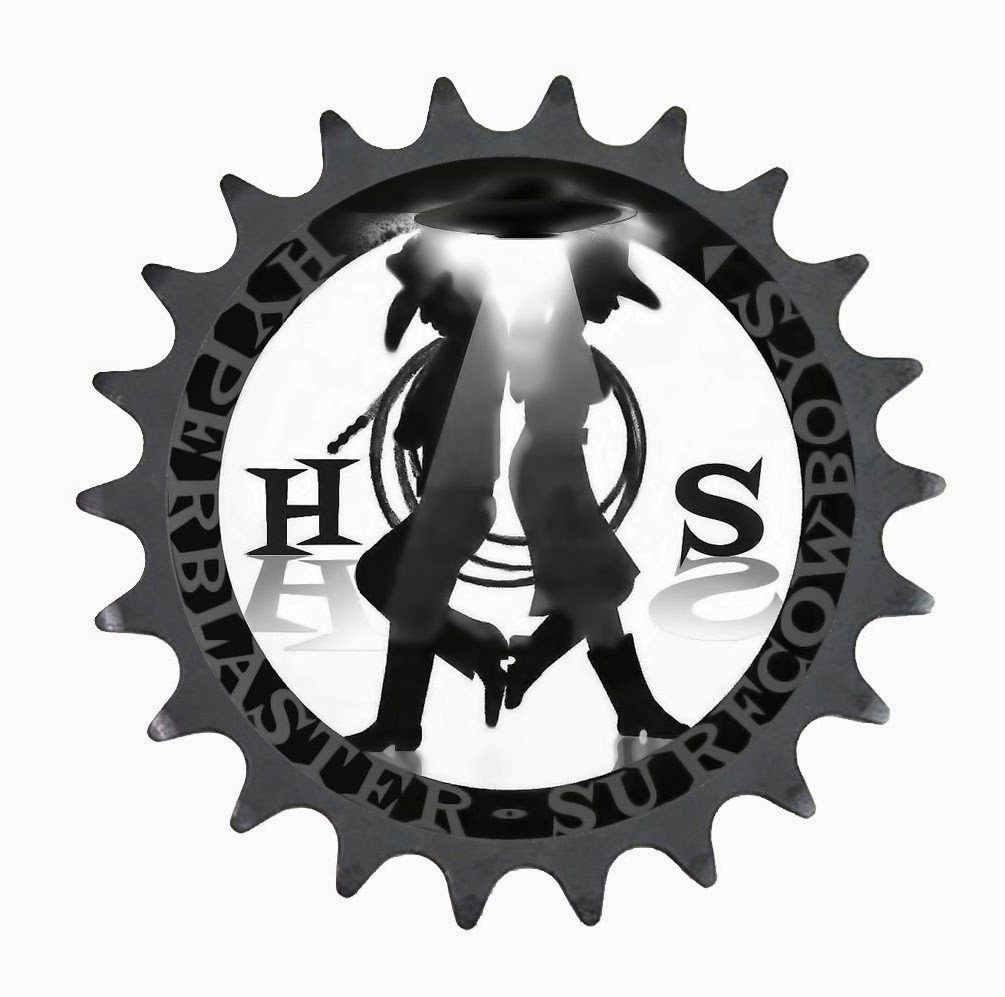 What to expect from a band with a name like this? The answer is easy, souped up surf instrumentals of course, fired at the audience at lighting speed.

Hyperblaster Surfcowboys is a trio from Amsterdam that plays music under the motto "Surf is back". And we found out just why that is is on the 25th of April when they played a duo bill with John Paul Keith and the One Four Fives in Q-Bus, Leiden under the name "Hail to the king".

Surf and any other instrumental guitar songs from circa 1960-1962 are from beyond my musical recollection. A song like 'Apache' or 'Walk don't run' would be played every once in a while on the radio, but that must have been about it. Music that was long gone, music that babyboomers could talk nostalgically about, but simply did not move me a lot. That did not change when Quentin Tarantino put some surf into his famous movies nor when a sixty something Dick Dale started recording and touring again because of that. When elements of surf are put into rock and roll, lets take The Paladins as an example, then I start listening some more. But on the whole, neither is something I listen to at home. And to get any misunderstanding out of the way: I am not writing about songs about surfing here. So don't expect this to be on The Beach Boys or Jan & Dean!

So here we are in the Q-Bus. Three guys on stage. Guitar, bass, drums. A beautiful light blue and white Fender Stratocaster, and an equally beautiful green, shiny Epiphone bass. Loads of reverb and echo on the guitar and away we went. Listening to surf music live, admittedly my first experience, so there is not much to go on by comparison, there are basically two sort of songs. The more up tempo ones which are truly exhilarating and slower ones, let's call them surf tearjerkers. I can do without these. They are nothing but a reverb doused variation of the little crying gypsy boy or clown art sort of music, played preferably with an accordion.

However, when things go loose, Hyperblaster Surfcowboys lets things go loose. From the typical down run on the bass snare of the Fender to great accents and chord changes, everything just goes in one blast. Extra cudos have to go to the bass player, Dirk. He went off on some great adventures on his bass, so that in a way we had two solo instruments at the same time, with drummer Alex who kept it all together. Hyperblaster Surfcowboys may not play flawless, they didn't, but the music is presented as it should. Working hard, kicking up a storm and showing to the audience that they mean what they play. Whether they played a cover or a song by the band itself, there sure was no difference in the attitude. A song is attacked, tossed around and thrown to audience. Hyperblaster Surfcowboys, or Mr Hyperblaster on guitar, RumbaRidskin on bass and Eddy Cracker on drums as they call themelves on stage is on fire on a regular basis. My opinion on surf as such hasn't changed because of what I saw, but this was fun. And isn't that why we go to a live show?

You can watch and listen to the band Live at Volta here.
Gepost door Wo. op 11:02