Nobody dances in this town. He's my Brother, She's my Sister 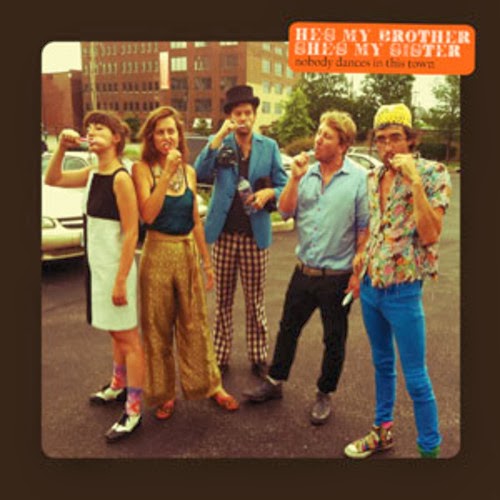 Having been teased by the Noisetrade.com EP 'Let it live free' (a great title for an EP that is basically given away for free, it was time to listen to the whole album. I started doing so and was as pleased as I was with 'Let it live free'. Nobody dances in this town is not a new album, having been released in 2012. As it's new to me -and probably to a large part of the world- I feel free to write a review anyway.

Having heard 'Let it live free' it is no surprise that Nobody dances in this town is also heavily submerged in roots rock. Some songs are more in the direction of folk, some in rock and others towards country. Together the 11 songs make a potent mix of tradition and rocking guitars, with enough elements put in there to make the songs stand out on their own as well.

The band with this very eye catching name does consist of a brother and a sister, Rachel and Rob Kolar, who harmonise during the whole album, alternating singing lead. They both, but Rachel mostly, have this gravely edge to their voice, giving most songs on Nobody dances in this town a rough edge, that is not necessarily present in the music itself. The music is mostly extremely pleasant. A slightly rough sounding rhythm guitar accentuates what the bass and drums are laying down. Over this solid basis there are some embellishments at times. But mostly the extra comes from the singing of Rachel and Rob. Singing not unlike Alex Culbraith's singing in The Parlor Soldiers.

The music on Nobody dances in this town has an upbeat side. It is the sort of music that makes me happy quite easily. Just as it would make me move just as easily in a live situation. I remember shows by artists like 100 Year Flood, Jon Dee Graham, Gus Black in Q-Bus, Leiden like that. He's my Brother, She's my Sister will definitely have the same effect on me. Not that the topics are necessarily happy, there are even accents that are in a minor key, it is in the tempo, the rhythm and the way of singing. This band knows how to play the happy and smile strings. Americana, roots, rock and a hint of country all come by in a mix that is very attractive. 'Let's go' is one of the great examples on Nobody dances in this town. A rocking rhythm guitar, exuberant singing, great lead playing and a fun rhythm that drives everything forward in a very compulsive but utterly pleasant way.

'The same old ground' is another of my favourites. It has an undeniably catchy chorus. Ryan Richter's slide guitar finishes off everything quite nicely, as he does in most songs. And there are some great dynamics. A kick drum, hand claps and all, give 'The same old ground' this little extra. There is even some tap dancing on the record, in the appropriately named 'Clacking heels'. Lauren Brown is a tapdancing drummer, so we get what is announced. That is the part I personally could have done without, but hey, if that is all I can complain about? I can't find much wrong with Nobody dances in this town. In the roots rock segment this album is one of the better records I recently heard. So, let it be two years old, this review is well deserved.

The album cover even has a message for young and old: brush your teeth. Even when you play in a band. Here's some sound advice for y'all.

You can listen to 'The same old ground' here.