You were right. Brendan Benson 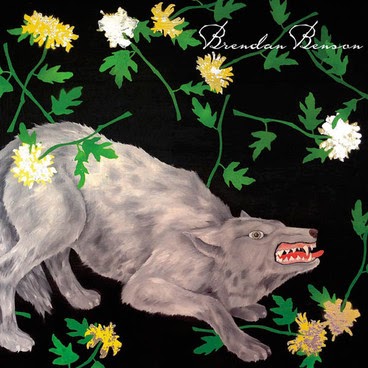 This is not the first time Brendan Benson features on this blog. His previous album What kind of world received a positive review in 2012. Now that his latest effort You were right is released, it is time to pay some close attention to the album. Benson, also known through his work with Jack White in The Raconteurs, is a song smith, who always looks for the elements that make a song sound super smooth. That perfect pitch in a harmony vocal, an extra chord in the changes, a melody that catches my ear immediately. In short, someone who searches and finds the perfect pop song to sing. How does Brendan Benson fare on You were right?

To be honest, at first listen I was a bit disappointed. I missed the spark that was so clearly present on 'What kind of world'. By now I can say that I mustn't have been paying attention. You were right is not far from running on the heels of its predecessor. Let's listen to opening song 'It's your choice'. It starts of modest with a few note bagpipe simulation riff over two simple chords on which more and more perfect chord changes, instruments and harmonies are dropped. Sounding almost normal, the ease with which 'It's your choice' flows. At the same time the song has a Lou Reed/The Velvet Underground rhythm guitar, that halts, accentuates and propels at the same time. A little organ sound is added to give some 60s flavour to the bridge. The sliding guitar adds some extra as does the 'Baba O'Riley' keyboard sound. And this is just one song!

Rumour has it that The Raconteurs are working on a new album. It seems that Benson is in shape to participate. You were right reminds me more of his hobby band musically more than ever before. 'Rejevenate me' could be on The Raconteurs setlist anytime. A major influence on Brendan Benson obviously is The Beatles. Whether it's the harmonies or the way some chord progressions in his songs evolve, the influence shines through. In 'As of tonight' the references are very obvious, but what makes the song stand out a little more, is that Benson injects it with a little powerpop from the U.S. of A. circa 1979. 'My Sharona' or 'What I like about you' rockpop elements are added into the mix giving 'As of tonight' the proverbial piece of pepper up the you know where.

Another element is a hint of country rock. 'Diamond' has a The Eagles element in there. In the way of singing and the guitar solo. The acoustic guitar underscores this element with subtle, but driving playing. There are also some splatterings of psychedelia in there, but only to accentuate a greater pop feel, not outer brain estrangement experiences like the look-at-me-doing-something-very-weird statements some artists indulged in in the second half of 1967. You will even find a song based on soul. 'I don't wanna see you anymore' has Otis and Wilson horns, but could have been sung by someone like Leo Sayer as well. 'I don't wanna see you anymore' definitely has an 'Orchard road' sort of quality. I like it more because of the way the song is dressed up, more exiting, less drama.

This is not the last musical form. There is a reggae rhythm in 'I'll never tell', before the rhythm explodes into to powerpop. A very unexpected change and one that works rather well. In other words there is a lot to discover on You were right, not unlike on great The Beatles albums. And coming close in quality.

Not that all is well. 'She's trying to poison me' is a bit bland, where 'Purely automatic' may have a driving rhythm, but misses that spark that makes most songs on You were right shine. They are exceptions on a further near excellent album. To get to the bottom of You were right, Brendan Benson is exploring many different musical genres here and clearly gets away with all. His craft to come up with some pop elements in each shines through, making You were right a very special album, with many songs that shine, well like diamonds.

You can listen to 'Diamond' here.