Promises of no man´s land. Blaudzun 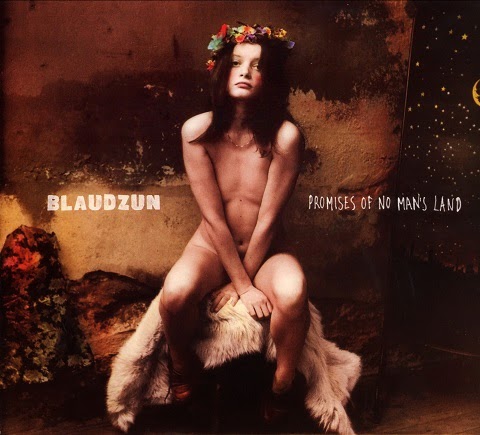 Blaudzun took The Netherlands by storm in 2012. With a great album, 'Heavy flowers', TV appearances and sold out shows at the larger pop venues. This blog reported on both musical outings on record and live in the spring of 2012. Success may have put some pressure on Johannes Sigmund to come up with a follow-up. Listening to Promises of no man's land, there is no difficult follow-up syndrome in sight. Although there is a slight worry about a Blaudzun format for future records, on this fourth record there is no fear of that. Promises of no man's land deepens Blaudzun's sound some more and while digging seems to have found the motherload. Promises of no man's land is richer in texture, wilder in sound and even better. I have no hesitation to state this right here and now.

Blaudzun is the brainchild of Johannes Sigmund. At the core he is a singer-songwriter, who takes songs to the band to puff them up. At a show you see that everybody plays what is necessary to make a song come alive. Instruments are switched the whole time, giving a very lively feel to the show, but also gives the impression that everything is possible. As if what we see is accidental and could have easily worked in a different setting as well.

This album starts with confusion. What am I looking at? An odd choice for a cover, but certainly art and a statement of some sort, although I'm not sure what. The music itself does not confuse. The first songs are instantly recognisable as Blaudzun. The diversification comes in the second half of the album, when the mood goes down and the embellishments are shed off for at least parts of songs. 'Wingbeat' may have some reminiscences to Mumford & Sons, but easily beats each individual song by this band. 'Wingbeat' is a fantastic song that starts off solitary, empty and ends with a climax, that also ends the album. Totally unexpected everything ends, while 'Wingbeat' seemed like a nice jump-start for another great song. What a way to end an album!

Promises of no man's land starts off holding back. Musically totally in contradiction to the title of the song 'Euphoria'. The subject of choice may well be Blaudzun's response to the feeling of elation the band must have felt after the breakthrough in 2012. 'Euphoria' is the ideal bridge between 'Heavy flowers' and Promises of no man's land. Reminding most of the songs on the previous album. Musically the euphoria comes forward more in the first single of the album, the title song. Blaudzun is not the kind of band that will ever have a just happy song, but the way the verses change into the upbeat chorus, with its languorously spread out piano notes, comes as close as possible with this band. Great song and choice for a single by the way. A sign than Blaudzun dares to take songs out one step further than before. The same goes for the heavy handed  'Too many hopes for July'.  It is again the piano that gives an air of lightness to the being of the song. Not unlike the role of Roy Bittan in the E Street Band. Blaudzun rocks hard here and gets away with it just fine.

The next song is 'Hollow people'. Just by listening to the intro it is clear that the pop feel that the intro gives to 'Hollow people' takes Blaudzun as a whole to another level. The melancholy that is inherent in if not the trademark of Blaudzun's music, is given a shiny polish treatment, that makes the melancholy comes out as the perfect balance between bitter and sweet. The song even has a coda as if Armin van Buren or Avicii has become a bandmember. 'Wasteland' has this by now familiar Blaudzun sound, the violins in the background doing there long held note thing. By then it is clear that Promises of a no man's land is a fantastic album. There is no doubt left. The only down side to this album is that it seems to be over before I started listening. It is over so soon! Or does time just stop when I listen to it? This high quality is not maintained over the second half of the record as a whole, but that is only by comparison of a set of songs so close to perfection, that almost nothing comes close. But then 'Streets of Babylon', 'Halcyon' are also great songs. So what am I writing just now?

Blaudzun is back with his best album to date. As if Johannes Sigmund has cast aside all modesty and shyness. Promises of no man's land is an album that ought to make Blaudzun a well known name in a lot more countries than my own. This takes more than just good music. Meeting the right people, people giving the right push at the right moment, etc. In the meantime I hope to see the band in one of the local venues close to me, before he breaks big in 2015. Promises of no man's land is one of the best records released in 2014 so far. I'm starting to become quite proud to be Dutch from a musical point of view.