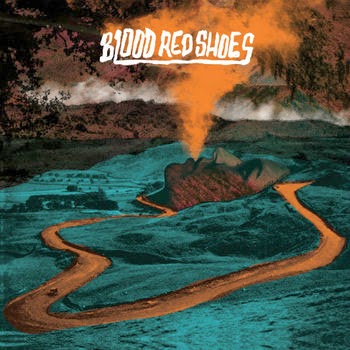 The band that produced my favourite album of 2012 and had a very nice interlude EP in 2013, is back with a new album. It is simply named after the band itself: Blood Red Shoes. It only took me a few songs to fall in a deep musical love with Blood Red Shoes. Although it is impossible to write here what the impact of Blood Red Shoes will be in the months and years to come, in the here and now I dare to say that this album is better than 'In time to voices'. The quality in the second part of Blood Red Shoes is more consistent. Whether that is the influence of not working with anybody else and isolating itself in Berlin may well be. The outcome is a rough sounding, hard rocking album, with some pleasant, but dark overtones.

Blood Red Shoes is a duo from Brighton in the U.K. consisting of Laura-Mary Carter on guitar and Steven Ansell on drums. The music Blood Red Shoes plays ranges from punkrock to hardrock with an edge of grunge in there. Blood Red Shoes certainly has found the well Kurt Cobain dipped his pen in, but just as easily has a pop element in its music like colleague duo The Black Keys has found on its last album 'El camino'. Listen to the great riff in 'A perfect mess' for that. A last element is the rock side to David Bowie, that chip of U.K. cool, that Bowie can serve up, certainly has found its way into the mix of Blood Red Shoes.

I've liked this band from the first album, 'Box of secrets' (2008), although I had my doubts whether things would come out alright after 'Fire like this' (2010) was released. All doubts, if I had any after 'In time to voices' left, are gone with the release of Blood Red Shoes. This band has nestled itself in the top league of new favourite bands. Under Arctic Monkeys, but certainly up there with Franz Ferdinand and Kaizers Orchestra (ex- Kaizers Orchestra. No more musical disastrous news from Norway, please!)

Blood Red Shoes at first is this storm of rock music that was unleashed on me. This wall of sound that rocked loud, with so many nice melodies and riffs flying around. These loud all filling rhythm and pounding on the drums. Man - woman singing in and out of the songs, alternating, harmonies, solo. Too much to differentiate at first. Just very, very good. Without a single dip, I was at the end of the album and just played it again and again. I was in the middle of an aural trip without end. Until my regular life came knocking and the trip had to be ended.

That gave me time to listen again later and more in-depth. That was when other pearls revealed itself. The psychedelic, slow paced, hard-edged 'Cigarettes in the dark'. The deep-gutted oomph several songs get in the right places. A dark piece of guitar sound that kicks in so hard that it makes a song electrifying. But mostly it is the heavenly melodies that drive me into this album full speed. 'An animal', 'Tightwire'? These are just great, great songs. It also doesn't matter who of the duo sings lead. There's no basic difference in the songs, nor in the quality. Besides, they sing lead alternated within songs as well. The melodic strength of the songs does not depend on the voice of either Laura-Mary or Steven. This is covered in every song. Blood Red Shoes has this pop jewel element well hidden under a layer of noise and pounding that seeps through every time, again and again in each song.

With 2014 only two and a half month on the way, another important release is in the pocket. Blood Red Shoes is an album that I will be playing for a while to come, just like 'In time to voices' broke a record in my iPod in 2012. Blood Red Shoes is one of the best bands around at this moment. Period!