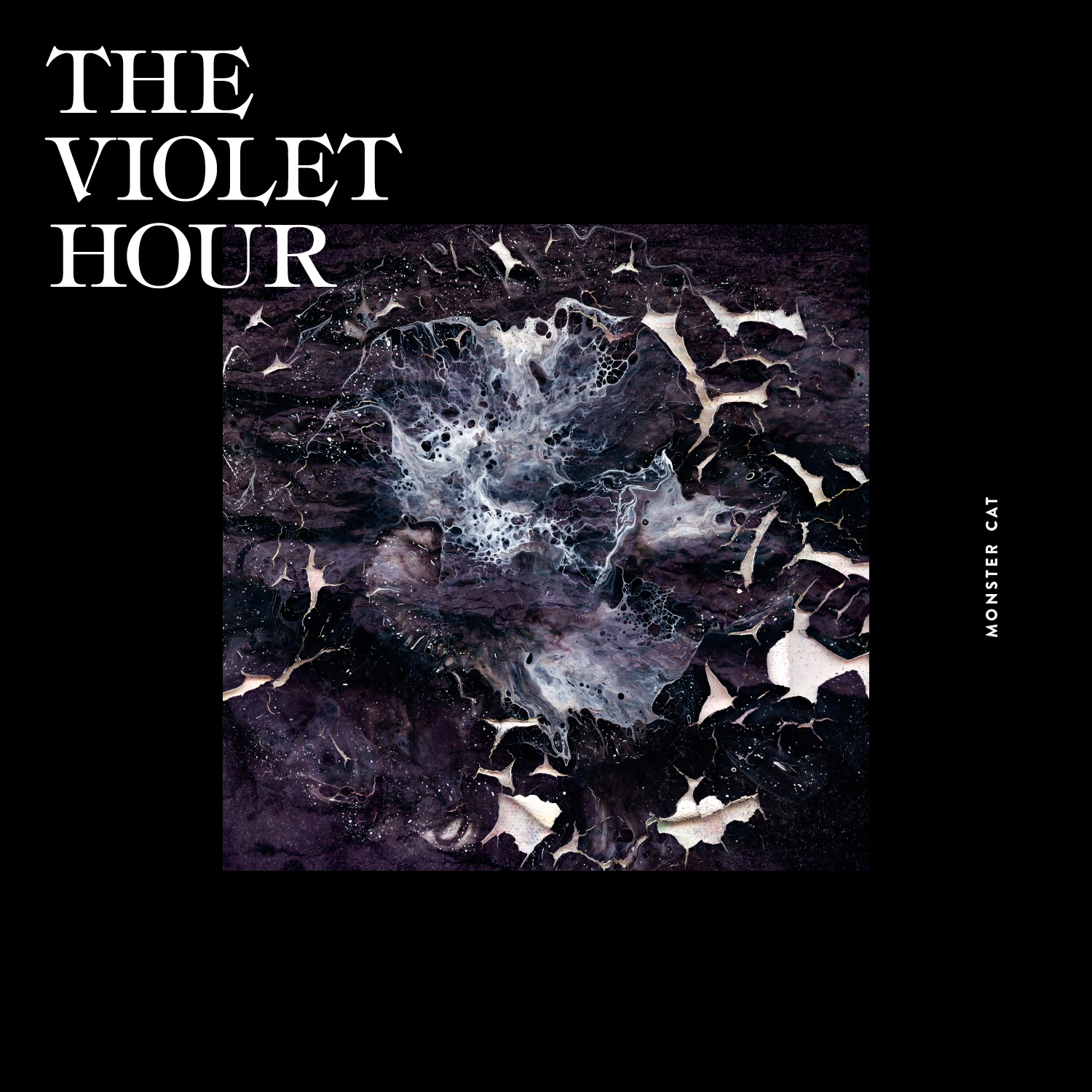 Two years ago Monster Cat featured on this blog with the brilliant EP 'Mannequins' followed by an interview with the band, which is one of the best read features on this blog to date. Last summer there was a crowd source action and as promised the download arrived on the day I had noted in my calendar as a reminder. Speaking of efficiency! A full album from Monster Cat called The violet hour was copied into my MP3 player for closer inspection.

The first chords on The violet hour are ones of total estrangement and disorientation. Like the whole song 'Take me to love' sort of is. What is this?, I asked myself. If anything these strange notes put me on the edge of my chair as The violet hour could go anywhere from this opening onwards. Also in a horrible direction. When I played 'Take me to love' for a friend, he said "it seems to me as if there are two songs going on at the same time". The second person listening along clearly couldn't believe his ears. He just looked incredulously wondering whether this deserved the name music. 'Take me to love' is a very courageous way to start a new album. Whether it is a smart one, is another matter. Having listened to the album several times by now, I know that it's the right decision. It is a statement, here we are: Pay attention!

Monster Cat is a band from Singapore that I noticed around two years back when it posted it's EP 'Mannequins' for free on the internet. I was really impressed with the EP. It had something magical. You'll get the drift if you read the post. The magical component is missing on The violet hour. The totally free flowing component of perfect (symphonic) rock has disappeared under this cloak of estrangement. There is constantly something disconcerting or destabilising going on in the total sound of most songs. Weird noises or chords that bring friction into a song.

These factors make The violet hour harder to digest but not necessarily a bad album. Album opener 'Take me to your love' is nothing but a fantastic song if you give yourself the time to discover it and don't turn the record because of the opening, dissonant chords. The same happens with 'Creature'. This slow starting song, gets a kick in the guts as the band steps up the tempo and does a Bee Gees in the singing as well. Underneath this hard rocking beat appears an accentuating, choppy rhythm guitar and hard playing lead notes flying of in all directions. Again estrangement all around. In the back ground fill-in bass player Jase Sng shows why he received so much praise from the band. (There is one Monster Cat missing since 'Mannequins'.) It is at moments like these that the band proves that travelling to Sydney in Australia to work with producer Tim Carr was a smart move. Listening more often to The violet hour it becomes more clear to me that the mysticism I liked so much on 'Mannequins' is still there, but that an extra layer was added to the music of Monster Cat that adds to the attraction. The new element needs time to adjust to, but definitely adds.

The songs on The violet hour are varied. 'Pockets (All that I have)' is kept very small. The sound is broadened from just an acoustic guitar to a lot more, but it remains a sensitive ballad. 'Spiders' has a very different rhythm. 'Cradle' has the two songs going on at the same time element again and I like them both. In all songs there are elements that allow for surprises, new snippets of sound to discover are presented, that show a new angle on the song. This makes The violet hour grow with each, digital, spin. A lot of elements come together, without being predominantly one style. All these elements make the music on The Violet hour not only very authentic, but also give each song its own distinctive feel, unique among their twelve brethren. My initial inhibition to the album has totally disappeared, bringing it into just as heavy rotation as 'The FC Walvisch sessions' by The Silverfaces. The name dropping is no coincidence. The two young bands have more in common than being played by me regularly.

How can I ever write something objectively now that I just found out that my name is on the record sleeve? As contributor to the pledging process I receive a big thank you from Monster Cat. With from what I heard on The violet hour I can only reciprocate that. The violet hour is a great new step in the career of the band, that makes many next steps possible as horizons were opened that allow a lot of exploring on future albums.

To think that Monster Cat played one show in Den Haag in 2012 and I really could not go there that evening. Let's hope that that can be mended sometime in the near future.

You can get more info on The violet hour on Monster Cat's website.

For you in Singapore, listen to (and buy) 'The FC Walvisch sessions' here on Bandcamp.
Gepost door Wo. op 18:42