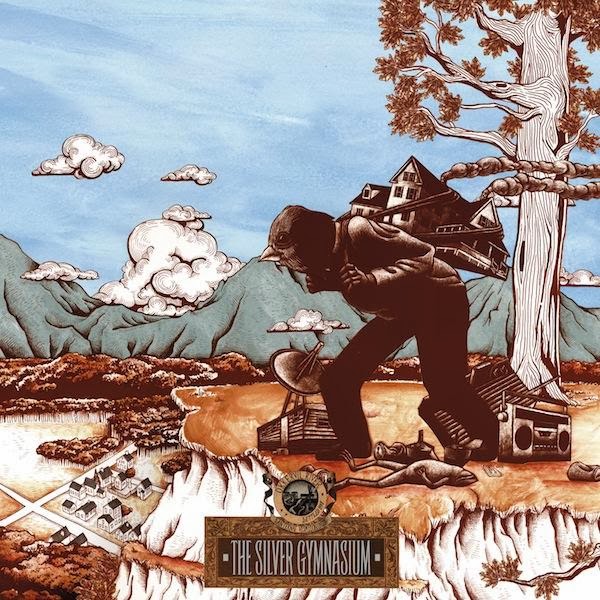 Okkervil River is the name of band that I've encountered a few times in the past years, but somehow never got around to listen to. The name also popped up when I read up about Shearwater when reviewing its 2012 cd 'Animal joy' and now I've The silver gymnasium in the record player quite regularly. Okkervil River has produced a new album that has references to great pop music, with soft melancholy overtones. Singer Will Sheff sounds like he could burst out crying at any moment, but in such a way that he carries the songs on The silver gymnasium in a great way.

I've laid The silver gymnasium apart for quite some time. The reason being that I have a hard time defining the music of Okkervil River. Things start with the fact that the music and the melodies speak to me. The songs made an impression and invited me to come back to them. Each time I made a mental note to write a review, but kept postponing. No stopping now.

The silver gymnasium at first has a pop feel, not in the sense of popular, aiming for the number one spot in the hitparade, but to achieve in making free flowing, beautiful melodies. Adorn them with nice sounds that faintly remember of great feats in pop and rock. From Abba/Roy Bittan piano playing to pleasantly sounding trumpets, an 80s sounding synth: a lot is aimed at pleasing.

Under this or better over this is the bitter-sweet singing and the feel of minor chords. Not all is fun in the silver gymnasium. This combination of pop and sour is what makes The silver gymnasium work in my opinion. A darker song like 'Walking with Frankie', with the dark guitar sounds in the, at first, otherwise fairly empty song is in sharp contrast with a beautiful pop song like 'On the balcony' and the following 'Down down the deep river' or the in a light way brooding 'Pink slips'. ("A prostitute paid in pink slips".) This gives The silver gymnasium an edge, something extra to digest, that boosts the quality of the album in a tremendous way.

When the horns kick in I'm reminded straight away of Antwerp based band TMGS. 'Rivers & coastlines: the ride' is an album any Okkervil River fan should check out straight away (to assist, the link is provided below), but I'm also reminded of Chuck Prophet, not only because of the way of singing. There's a hint of Springsteen, but only in the melody, not in playing. The rock element is well hidden in the midst of Okkervil River. Present but obscured by all else going on. Okkervil River doesn't shun reaching for things greater, but without aiming for the obvious, like U2 and Coldplay that have become a musical trick. Okkervil River aims higher with the right elements in the right places. This is a fine line to tread, but it manages superbly.

Reading back I notice that a lot has come out any way once I gave it a serious effort. That leaves the kind of weird cover, not unlike Boy & Bear's last album cover. It's about the songs, isn't it? The silver gymnasium is an album that deserves extra attention. Here it was.

You can listen to 'It was my season' here

and visit the bandcamp page of TMGS here: