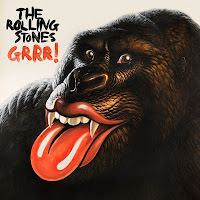 You can listen to 'Time is on my side' here.

Having just bought the 10" version of 'Doom and gloom' for an amount of money that would nearly have bought me Grrr!, I thought why not write a review on the new greatest hits album of one of my all time favourite bands. The Stones and I go back to 1969 with the release of 'Honky tonk woman'. My first Stones song, soon followed by 'Through the past darkly', a compilation album owned by my 3 year older neighbour Hans. That relationship developed in me becoming a great fan, having seen the Stones play on all tours since 1982, owning a big stack of singles, although I will never be complete, albums and dvds.

Of course Grrr! is totally unnecessary. Owning several compilations and live albums that are basically alternative compilation albums, there is absolutely no added value in Grrr! Two new songs, that's about it and a great cover, I'll grant that. However, if we look at the content on offer, then there is absolutely no denying that the quality of songs is exceptionally high. Starting with first single 'Come on', a Chuck Berry cover released in 1963, all the way to the new song 'One more shot' recorded in August 2012, there's 49 years of rock and roll history captured on the three discs of Grrr! The rather bland, but fun, 'Come on', is soon followed by better covers like 'It's all over now' and 'Little red rooster'.

It is from 1965 onward that the Stones basically start writing their own songs and the moment that the influence of Brian Jones on the band started to wane. These first six years are over-present on the three discs for one simple reason: Between 1963 and 1969 the band is a virtual hit machine, releasing a hit single about every few months. It's from 1969 onwards that hiatuses start to show and after 1989 five year or more cycli are no exception. And the band had stopped being a hit machine years before that. What it did do, is add fans each year along the line, where most other bands fade away.

The Stones is handicapped by the very thing every band is handicapped with that lasts past the first few years of success. The longer a band exists, the more comparisons are made to its older work. At live shows nobody wants to hear a new song. 'We want the hits!' And that is the moment for me saturation kicks in as far as live shows go. I've seen enough Stones shows, have enough compilations, own more that enough live DVDs. So get on with it gentlemen and give me new songs in 2013. I'll be the first to buy the album and the singles. (And a BBC album, thank you.)

Grrr! does show that the band has delivered the goods on its later albums. Not even all highlights are on this compilation and some of the best album tracks were added instead of just singles. Live shows I've attended, proved that 'Saint of me' is a great song and embraced by the fans as well, as is 'Anybody seen my baby?' (1997). 'Love is strong (1994) is a great single. 'Tattoo you' (1981) is one of my favourite Stones albums of all time, although it sounds strange to speak about a 31 year old album as later work, but it is really. There is a strong line of singles as well all the way up to 2012's 'Doom and gloom'.

Grrr! is another compilation in a long string of compilations, live albums and DVDs, that does not add anything to what already exists, but it does prove again how incredibly good this band was over the past 49 years and is, judged by the footage I've seen of the recent shows. Living legends and venerable veterans of rock. There's no denying that. Looking forward to review your new album, gentlemen, as we are counting along with you.....

You can order Grrr! here