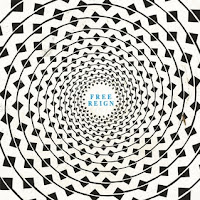 You can listen to 'Miss you' here.

Clinic is a band that I knew of one album a friend gave me a copy of to listen to. The eclectic mix of slow songs and staccato up tempo songs on 2002s 'Walking with thee' with its strange sounds as lead tones worked pretty well. The four up tempo songs still come by in my car through the mix tapes I made years ago. After that I lost the band from sight again. In the past ten years they apparently made four other albums that totally passed me by. And then I laid my hands on a copy of Free reign. To my surprise I like the album even better than 'Walking with me' as Free reign works better as a whole.

Not that so much has changed. The term I'd use for describing the music Clinic makes is estranged. Clinic almost pushes people away - and probably actually does so with a lot of people. Too weird, too strange. The singing seems to cling to the edge of sanity, perhaps the other way around, trying to remain insane enough to convey these moments of anxiety and uptightness. Like in 'Seamless boogie woogie, BBC2 10pm (rpt)'. It's like Frankenstein, the monster that is, singing to a girl "you're beautiful. You're beautiful". What do you expect the girl to do?

Clinic is around since 1997, stemming from Liverpool and hasn't changed band members once since. Adrian Blackburn, Brian Campbell, Jonathan Hartley and Carl Turney play respectively guitar, bass, guitar and drums, but after that it seems a free form on who does what to create the end product. Keyboards, woodwind or brass, what comes at hand to contribute to the overall atmosphere.

The moment you listen passed the tenseness, a world of beauty shows itself. Not very much unlike The Black Angels on 'Phosphene dream'. If you allow yourself to be hypnotised by the sounds on Free reign they take you to another world. The sax solo on 'Cosmic radiation' is mesmerising in its beauty, while the wah wah guitar in my other ear does its best to turn the song inside out and fails. It may be haunting this song, but its beautiful at the same time.

The production of Free reign gives the album its eeriness. Like sounds in a huge cellar beneath a castle, all dark. Echos, reverberations from the walls, creaking wood, that is the atmosphere here. At the same time Clinic lets in just enough pop influences and melody to not go over an alternative edge of avant garde. Its use of vintage keyboards give all sorts of bleeps to upset the pop element again.

Adrian 'Ade' Blackburn's voice is treated electronically to assist the atmosphere towards the otherworldly. A bit, yes, clinical. But that goes for every other instrument as well, as if a digital veil or blanket was laid over the sound. The effect it had on me, is that I'm listening to a very exiting album, with weird but exciting sounds coming out of every nook and cranny of the cd. I let Clinic surprise me and they did. Great fun!

You can order Free reign here