Get your ya-ya's out! The Rolling Stones 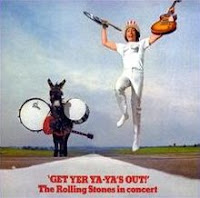 You can listen to 'Sympathy for the devil' here.

Let's have a look at another of my all time favourite albums, Get your ya-ya's out!, The Rolling Stones' second live album, released in 1970. I bought the album in 1976 and am now on my third version on cd.

The Rolling Stones were a rhythm and blues cover band for the first two years of its existence, became a great singles band in the three years after that and from fall 1968 onwards found its true form as a fantastic album band, that released singles from these albums. All three sides come together on this album in a grandiose way, as the tracklist shows. Provided we take 'Jumping Jack flash' as an example of the singles period, which I do. It was the last single only the band released.

Mick Taylor was only a member for about six months at the time, but he had totally found his way and soloed his way home in a fingerlicking good way. While Keith Richards, (Richard at the time) is as tight as he's ever been, even if he takes some solos also. The foundation laid by Watts, Wyman and Richards is very solid. As such the band is different from the Brian Jones era and now with Ron Wood. The famous Stones weaving took and takes place there. Not so with Mick Taylor. For one this version of 'Sympathy for the devil' is the best song that The Stones has ever recorded. It is driving, exciting, haunted and includes the best two guitar solo's ever played by the band. Taylor is a too good guitarist to just weave.

Overall it is the mix of songs that makes Get your ya-ya's out! as good as it is. From the three, then, recent hit singles, the two Chuck Berry covers and the five album songs from the last two albums, 'Beggar's banquet' and 'Let it bleed', the mix is perfect. Rock and roll, blues(rock) and Stones songs as 1968 and 1969 set the standard for the rest of its career all come by.

'Midnight rambler' builds a tension that is released in the finale of the song as the tempo changes. Jagger leads the band in a great way through this song, including a mean mouth harp.(It's not for nothing that Mick Taylor made his entrée in the 50 years and counting shows in this song.) Again he plays great here. How good the band is playing rock and roll covers is shown in 'Carol' and 'Little queenie'. Good and tight, while the Chuck Berry licks are down to perfection. The guitar work in 'Live with me' is so terribly exiting, that it makes me start practising again and again. I just love the very bluesy version of 'Love in vain'. On this album it becomes a Stones song instead of a rendition of a Robert Johnson song. 'Stray cat blues' is mean, dirty and alive, so much more so than on 'Beggar's banquet'. Let's not forget the three songs in which Ian Stewart shows his great boogie woogie and blues playing on piano. The Rolling Stones sold this man so short! In other words, except for the sixth Rolling Stone there's no one on stage. Just the band.

In 1969 The Rolling Stones took back to the stage after a two year spell and managed to do what The Beatles could not. The band took their best two albums to date to the stage, played with modern PA systems that had been developed in the meantime and took the US by storm. The foundation for the rest of its career is based on this tour. The band even got back home with the first recordings for 1971's 'Sticky fingers'. Now The Rolling Stones as an institution has grown beyond the band they were in 1969. Far beyond and has become a living legend. Perhaps the band played many better shows than these ones in Madison Square Garden in November 1969, but in my humble opinion it has never recorded a better one. Get your ya-ya's out! is the stuff dreams and legends are made of. One great ride. One piece of bundled energy. One hell of a live album. And that's how come every live album since is a (relative) disappointment.

You can order Get your ya-ya's out! here