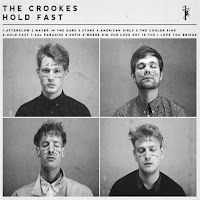 You can listen to 'Afterglow' here.

A while back from everywhere a buzz was created that this was a band to listen to: The Crookes. For some reason or other I never got round to it. As things go with hypes from the U.K. there was a review on the first album, 'Chasing after ghosts', that was only so so and that was it for The Crookes: I forgot about them. Till recently I laid my hands on 'Hold fast' and decided to give it a spin. What I heard was far from groundbreaking, but it is a nice album. Poppy with lots of pleasant melodies and guitars all over the place.

There is nothing much modern about The Crookes. Even the moniker Britpop does not stick to the band. I'd say that 50s and 60s pop is a better description. The way a song like 'American girls' is presented is a modern sounding version of a song The Animals or early The Small Faces could have played. The difference is that The Crookes play originals and UK bands around 1964-5 played loads of covers from the US. A song like 'Stars' could in a very different arrangement perhaps even been sung by the likes of Johnny Ray.

If we set aside all that says bands need to be the spearhead to new music, than we can take a look at Hold fast at its own merit. The Crookes present a lot of fine songs, with a good melody in a few styles. Surf guitar, bare Gene Vincent rock, 1965 beat. Four young Brits from Sheffield with a fascination for older music. In this they are not totally unique. If you listen to Hold fast, you will find quite some references to more modern bands that like to play the same sort of music. Let me suffice with mentioning The Rifles. Listening to Hold fast gives me the idea that The Crookes is one step more authentic than some others. The sound even comes close to Chris Isaak on Sal Paradise. George Waite's voice misses the crying bend in Isaak's voice and there is less echo on the guitar. The influence of, in other words, Roy Orbison, is obvious here.

At the same time the band likes to let a rock-pop sound into songs as well. 'Sofie' has this poppy quality with its easy to sing along refrain and clear sounding lead guitar sound. And this is where the influence of The Smiths betrays itself to me. Nowhere more obvious as in 'Where did our love go?' There's some The Jam in there as well.

A question begs itself to be asked. Are there any The Crookes in Hold fast? That is a tough question to answer. There are several songs that could have been recorded by the artists mentioned without having stood out. And there is the compliment for The Crookes. Hold fast holds a collection of great pop-rock-beat songs that stand out on their own account and as such is enough for me to be content with. Nothing new under the sun, but as long as it has this quality that's fine by me.

You can order Hold fast here