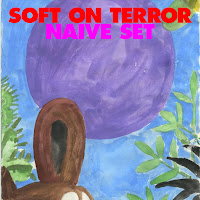 The artwork of Soft On Terror suggests a high level of DIY. Undoubtedly this will go for the music as well. The love for making and releasing music is a main drive for all involved in and with Subroutine Records. Naive Set will be no exception.

This inner drive to create is underscored by the average level of quality the releases of artists on the Subroutine label show. It is so easy to write on a lot of them.

Naive Set came into my life with the release of a single from its upcoming EP. The title song is a hybrid song mixing lo-fi with jumpy 80s post new wave and extremely interesting melodies. The song is very elementary. It doesn't do much more it seems than lay accents in the music and singing. The keyboard intro already suggests there's more to the song, although it easy to forget when the song starts. What caught me very early on is the pleasant melody of 'Soft On Terror'. Although I do not really agree with the lyrics. I remember a movie set in the Sahel somewhere where terror moved in and youngsters played some music in their private home. It did not end well for them. So better keep playing this music, Naive Set. The organ returns later in the song adding an enormous warmth to the song, almost turning it into another song. And do not forget to notice the subtle harmonies as well.

The three other songs on the album are somewhat mellower. The edginess is off, revealing a band that manages to incorporate 55 years of pop music into its songs and still have its own sound. Everything from The Kinks to Britpop and alternative rock of the past 30 years can be found here. This results in three beautiful songs where the instruments are woven into the whole and soft melodies are sung over it all. A soft voice not stressing anything makes things complete. This is what indie rock sounds like when the anger and confusion has made place for contemplation of a later stage in life, where things are starting to fall into place.

Naive Set does not need to create huge riffs or lots of noise. The band's strength is the way the instruments find each other within the song, bounce off and return, underscoring the vocals that are mixed prominently up front. The music can't possibly be described as 60s. For that indie rock characteristics are too prominent. The vocals, e.g. in the final song 'Nothing', could have been culled from a psychedelic song from the late 60s. No matter how nihilistic the lyrics are "I believe in nothing", "It all leads to nothing", etc., the song decries something else. Naive Set believes in its music, as all four songs, are well-crafted with a keen ear for detail. These are not random songs they do not believe in.

As far as I'm aware Soft on Terror is my introduction to Naive Set. A very pleasant one. There are several albums so I understand. Time to catch up.

You can listen to and buy Soft On Terror here: