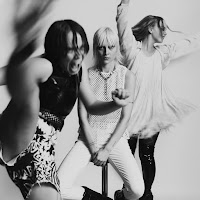 Sporty Spice, a stoic The Runaways singer and a would be ballet dancer, that is the impression I'm left with looking at the cover of Dream Wife's new album. Oddly enough this is the image that captures the music on So When You Gonna .... It ranges from extremely aggressive, to normal, to an occasional soft yet serious touch.

Dream Wife debuted almost 2 and a half years ago on this blog with its first album. An album that I clearly liked but did not spend too many words on. I remember it coming somewhat as a surprise that I truly liked the album, as I could not say the same for most of the host of girl bands that were released in the few years before 'Dream Wife'. It all started to sound the same to me. Not Dream Girl.

So When You Gonna ..., "kiss me" it goes in one of the aggressive songs, does not surprise me in that way. In the 2 1/2 years not much has changed for the band. It goes about its business of alternative rock with some punk thrown in for good measure. With a load of energy. The album kicks off with a bunch of feedback, a neat voice as if a message on the PA of your local department store, before the 'Sports!' truly starts. Energetic drumming, a tight bass and loud (muted) guitars. Over it the vocals and the harmonies our sung and shouted. 'Sports!' is more an opening statement than a very good song. The kind of song that captures attention. Luckily so, as there happens a lot on So When You Gonna ... worthwhile hearing.

Dream Wife seems to be able to find a right mix several times. The band is not afraid of dynamics within its songs. From a loud intro to nearly only bass and drums and back to a heavy chorus. This recepy works a miracle in 'Validation', without having to overdo a single thing. This way it can become an alternative pop song. The next song, 'Temporary' is a pop song. The guitar may be too loud, just like the bass and drum. The singing is far too much like in a dance song. And yet in another age and time this would have been a perfect song for a girl vocal band. 'Temporary' has that feel of innocence and teenage hurt. I'm not even writing on the intro of 'U Do U'. This is Teenage Hurt of capitol letters. It shows the vulnerable side of Dream Wife in a successful way and gives the new album depth and contrast. Let's say Blondie's  'In The Flesh' vs. 'Ex Offender'.

It took me a few listening sessions to truly grasp the layers Dream Wife offers on So When You Gonna ..., but now I have them in my hearing it makes the album better immediately. The band is able to excel in both sides. The punky rock and the girl band innocence, they both come by in good songs. In between are a few passages in songs that exemplify the middle position of the cover photo as well. Singer Rakel Mjöll is able to show her different voices in the varied songs as well, with surprising results. It all makes the album diverse, more interesting and better. Second album syndrome? To all appearances it seems Dream Wife weathered that one easily. Just listen to the confident (piano) ballad 'After The Rain' that ends this album. Confidence? Oh yes, Dream Wife has it in abundance. The weakest one here may be the first song trying to get your attention. After 'The Prettiest Curse' by Hinds another great girl, sorry, young women, band album entered my life in 2020.

You can listen to and buy So When Are Gonna ... here: