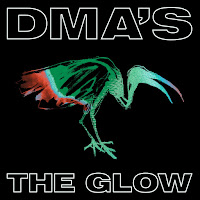 In 2016 DMA's debuted on this blog with its album Hills End and just like that album The Glow kicks off gloriously, here with 'Never Before'. The song combines Oasis brazenness with the rhythm of The Stone Roses or Madchester in general. 'Never Alone' is the kind of song that I can immediately attach myself to. Melodic, singable and a good strong rhythm.

The magic does not keep up though. Just like with Hills End the charms drop away after a few songs. Reading my review of four years ago, it had to do with the slower songs in the second half of the album. My doubts on originality are in there as well but certainly given the benefit of the doubt. All bands have to start somewhere.

On The Glow these doubts have become stronger. For some reason I am listening to new music differently. I have become better at or more strict in judging the music I am hearing over last months or so it seems. My strong doubts are getting stronger by the week it seems. Let me explain what is happening. These doubts have to do with the fact that I am listening to tons of new records and bands that recreate the past without adding an original element to their music. The albums at times are better in sound, the instruments are played superbly, the harmonies are great. Unfortunately the albums as a whole simply do not cut it with the originals. Almost as if they are an exam project of a musical education, instead of a new inspiring record from a (new) band. I miss true inspiration, I miss the personal inner flame and drive to create something new, unlike on 'Every Bad' by Porridge Radio. Old and yet totally new and inspiring.

That out of my system let me return to The Glow. DMA's introduces some dance elements, effects and rhythms into its music. That, often, distances the music further from me as it does here. There is a lot going on in several songs on The Glow. Take 'Life Is A Game Of Changing'. Fast rhythms, digital effects, synths, it's all there over a typical DMA's melody. Only one thing is missing: the song doesn't connect to me in any way. Where other songs like this in the past certainly have.

I had my doubts on Hills End. Unfortunately they have been confirmed on The Glow. The strings with Oasis are still in tact but I prefer to listen to the latest Liam Gallagher if okay with you. But, please, make up your own mind as this music could be ideal for you. It was the perfect excuse to write what I wanted to write for some time.