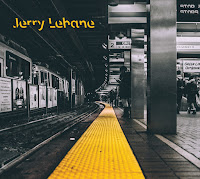 Are my speakers broken? The first sounds come out as if the speakers blew up just before putting the album on. Luckily the answer is no, as the glorious sounds of 'Kiss My Tattoo' fly into my room, shake up my ears and jostle around in my brain a bit. The opening song was discussed in a post on singles recently but is so good that I do not mind to sing its praises once again. This song is so good. It rocks, it's dirty, it's glorious. The opening notes so fast the guitar player can hardly keep up. Jerry Lehane has created a monster of a song .... 29 years ago.

For whatever the reason the five songs recorded in three late evenings are released only now in 2020. In the meantime Lehane, once a member of a band called Dogmatics, became a plumber in his hometown of Canton and played rock and roll with reunion shows of Dogmatics and with other bands. Something that just had to happen, something that needs to get out of his system.

The idea was to release them together with three new still to record songs. Enter Covid-19 and exit new songs. The upside is that we now have a mini album called 'Jerry Lehane'. That I got to know 'Kiss My Tattoo', one of the finest modern rock and roll songs I know.

The other four songs are laidback by comparison but show what a fine songwriter Lehane is. They show his more mellow side and pop influences from the 60s, the kind of songs he got to know in his early youth and obviously still is a huge fan of. I can relate to that easily.

Taking my words mellow and pop to literally may give cause to a fright listening to the opening guitar burst in 'Runaway With You'. Continue and you'll see what I mean. Of course this is a rock song, with layers of guitars playing together and off each other. It is the kind of track that reminds of a singer like Dion but then with a real rock sound added to the teenybopper songs of the early 60s.

"Do you feel like dying?", is an interesting question that Lehane puts to me next. I think I'll pass for a while. Ask some more years from now perhaps. In the meantime I have taken a lot to listening to songs like these. 'Feel Like Dying' is a great song. It combines U.S. rock with a British pop feel, scoring points with me immediately. Despite the title, 'Feel Like Dying' is a feel good song, something that seems hard to believe perhaps.

The only thing I can hold against the album is that perhaps the songs are not 100% finished. Some fade outs are a bit rough. That is really the only thing. In other words Jerry Lehane had gold in his hands but was unable to cash in. If someone like Dan Baird could score hits in the mid 90s, so Jerry Lehane should have been able to grab some attention for these songs. "I Love You, Period", don't make me laugh. It is no comparison, but okay, nice.

With 'All I Can Do' and 'Fish' the mini album has a great ending. In fact 'Fish' speeds up the tempo some more again. Like label mate Nat Freedberg can, Lehane puts the whip over the rhythm and the guitars lash out as well. Rock and roll comes to the rescue. What a record. What a beginning and what an ending.

Something that struck me with the single, strikes me again on the full album. This record sounds so fresh, as if it was made only yesterday. To my ears nothing has aged here. This music fits 2020 superbly and many bands releasing records this year can be jealous of Jerry Lehane's new/old mini album.

One thing is for certain, if Jerry Lehane is as good a plumber as he can write rock and roll songs his business must be a huge success. Now let's start to make sure the world starts to realise how good this mini album is. It's this GOOOOOOD! Spread the word, please.

You can listen to and buy 'Jerry Lehane' here: