The Quiet Earth. The Academy of Sun 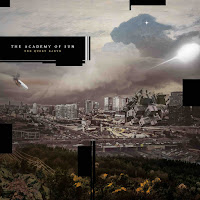 In a recent singles round up I focused on a b-side, also a song on this album, the penultimate one. From what I heard further I had not expected to write more on The Academy of Sun. I changed my mind.

The reason why is easily answered. On The Quite Earth The Academy of Sun presents serious music with a thousand influences woven into the music in a most pleasant way. From David Sylvian to Kaiser Chiefs and on to Marc Almond and a light version of Scott Walker. Just a to name a few.

Weaving influences into one's music is all nice, but it ought to start there and not end. The good news is, The Academy of Sun does just that. It turns out its own inspired songs. A good example is 'The House'. The bombast of Scott Walker's early albums is stripped away, some electronics added and out comes 'The House'. It is a song that is clearly influenced but holds enough of its own; and is so interesting to listen to. Especially as the band is able to add extra layers while the song plays itself out. Each layer comes as a new and nice surprise, making the song intrinsically better with each introduced layer.

Just as easily the band switches to Britpop merging everything from The Kinks to Suede and Supergrass in 'The Parts That Needs Replacing', a song I like so much more now.

The Academy of Sun is a band from Brighton and described as a post-punk band. There are hardly any traces left of this past. Band leader Nick Hudson, who sings and plays everything holding keys and band members Kianna Blue (bass, synths), Guy Brice (guitar) and Ash Babb (drums) have evolved wide and deep into a band not afraid of tackling anything in alternative rock.

Where too much diversity on an album sometimes makes me wonder who the band/artist really is or wants to be, with The Quiet Earth' I have no such qualms. The band managed to display an overall warmth on the album that, in combination with Hudson's voice, holds everything together. That warmth is an overall quality here making me come back to the album. Something the two singles did not prepare me for. Listened to within the whole though 'The Parts That Needs Replacing' is an excellent song.

Don't expect an easy album. Not all songs are ditties to be digested in one go. No, instead prepare for songs that allow you to grow with them. To discover the details, to find the beauty where an easy melody is completely missing. 'Charboy In The Cinders' is such a song. Atmosphere, seemingly isolated parts by instruments, screaming and crying, a drum that keeps playing a dark, heavy pattern, keeping it all together. The song works though.

The combination of the different songs makes The Quiet Earth an aural adventure. One where some parts are relatively easy going, others know rough patches, rock you hard, are scary or give you some pause. It all comes by. "So what if Caravaggio was a murderer" sings Hudson in the most Kaiser Chief, from over a decade ago, way. Interesting question. The man murdered a few people in anger. Still his work is revered in musea. Should it, in what seems to become another normal these days?

All in all, this is an album very much worthwhile to check out. You may not like everything and certainly not at once. I came back and started to appreciate more and more and still do. Changes are this could be the same for you. So feel free to try it all out.

You can listen to and buy The Quiet Earth here: