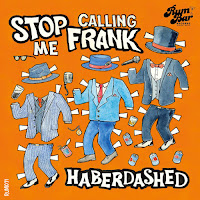 Haberdashery is a word mentioned a few times in Quentin Tarentino's great movie 'The Hateful Eight'. From what I know the word to mean it seems inappropriately named there. In fact my great-grandfather owned a haberdashery, manufacturenwinkel, in Amsterdam called The Star, De Ster, until he went broke during the First World War. The house is still there. Of course I never met the man nor have been to the shop where my grandfather grew up around. So the title of the new Stop Calling Me Frank album resonates well with me.

Luckily so does the music. Stop Calling Me Frank (SCMF) knows how to contain good times into rocking and rolling songs. The single preceding the album is the opening song to the album. 'South Of Somewhere' in a way is a desperate affair, nothing is really going as it should. Musically though it all is sunshine and cocktails in the breeze. The kind of rock song a rock and roll loving man needs to hear to make him feel alive. A sharp-blown harmonica tips the proverbial hat. 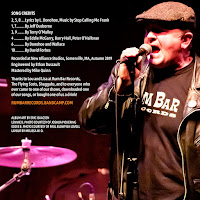 What SCMF does well, extremely well, is taking the music they loved growing up and that is a while back and turn those inspirations into new songs that are energised and played as if there have never been records like this before. It all sounds so fresh and alive. What Haberdashed shows is the love the musicians have for their music and it shows. There's no need to stick to 'Louie Louie' in the The Kingsmen version. Everything that happened since that day when high quality pop and garagerock met and blended ever so well, is worked into the music on Haberdashery. The result is fast-paced rock songs, a honking saxophone and the kind of choruses that beg singing along to. The party just goes on and on on Haberdashed. This is the real deal and there's no holding back for one second. Rock and roll getting me "in a frenzy", just like Lenny Donahoe sings in 'Baby Done Drove'. And who can possibly hate Billy Joel? Just ask SCMF. They answer you in a very direct way in 'Baby Likes To Rock'.

Just under the high brow music on the U.S.'s east coast there is a rock and roll scene in Boston that is obscured from most people in the world. The quality of most of the bands in this scene is so high that it is time the secret door is opened so that the rest of the world discovers this scene as well. There must be millions of people loving this music in the way like I do. How to spread the word? Start by running to Rum Bar Records' musical haberdashery right now. The link is provided below.

You can listen to and order Haberdashed here: