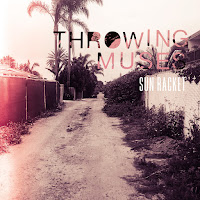 What has happened to my ears / my brain? I could not listen to anything by Throwing Muses and the alternative bands from the years the band broke. The closest thing to acceptance became Belly's second album. Not much else.

Now I'm reviewing my third Kristin Hersh album in a fairly limited amount of time. Sun Racket is with me for the whole of the way of its ten songs. Starting with the intro that changes, totally unexpectedly, into a whopping song. Distorted guitars, deep bass and dry but stark drums pounding. Hersh's voice sounds like it lay under a bus and the result of that collision was set on fire before put back into her throat. It is all this music needs. The music is dark, aggressive and totally alive.

Throwing Muses started in 1983 with the stepsisters Hersh and Donnelly fronting the band. With hiatuses here and there the band is active for nearly 40 years and still Hersh is only 53 years old. Drummer David Narcizo is there for nearly the whole ride so far, bass player Bernard Georges since 1992. With Tanya Donnelly out in 1991 to co-form Belly, the trio that still exists today was complete. It releases its 10th studio album in 2020 and first in seven years.

As I wrote something has changed in my ears in the past few decades as this is the first Throwing Muses album I really listen to. What I notice is how alternatively melodic the album is. How an extremely rough and loud moment can be replaced by a subtle, almost psychedelic sequence, always with a razor-sharp edge because of Kristin Hersh's voice. It's in the differences Throwing Muses presents during and in between the songs that make Sun Racket so interesting. The band excels in rough rockers and softer songs that manage to be ever so subtle, despite the distorted guitar weaving in and out of the mix. Or remain giving the alternative ballad a kick in the proverbial butt, hard. 'Upstairs Dan' plays out in this way, to a grand yet subtle finale.

The opposite song is 'Frosting'. Layers upon layers of guitars are stacked to play out one of the loudest songs if not the, of the album. Several Kirstin Hershes are singing to me and even more are playing guitar. The song sludges along in a more than grunge vein. Total chaos is promoted, except that the duo Narcizo - Georges keeps everything together and lands the song on its feet. No idea how the band expects to play this song live, when it can again of course.

Kristin Hersh can easily be cast as the bad witch in any musical based on a fairytale or two, singing for her band it is the best deal possible. It gives Throwing Muses an edge that most competition will fall short of. Sun Racket, to my initial surprise, is an album I truly like a lot. Always have an open ear (and mind) and never judge before. That is the motto of

You can listen to and buy Sun Racket here: