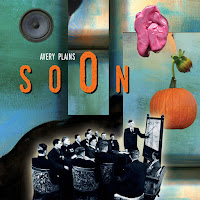 Recently I asked myself a question once again: Am I getting biased where alternative rock music from The Netherlands is concerned. Let's say from circa 1975 onwards not a lot of Dutch bands entered my collection if they had not grabbed my attention before that date. The main exceptions being Herman Brood, with still remaining doubts on album level and Doe Maar in the early 80s. The first album that really impressed me after that was 'Lamprey' by Bettie Serveert and 'Caesar' by the band with the same name. In the 10s and now early 20s band after band keeps being added. Most of them I would never have heard from had I not started this blog.

Avery Plains reached out to me if I was interested to listen to its upcoming album. After a first peak I did so with gusto and pleasure. There's a lot of melodic noise on the album that combines a couple of decades. Avery Plains' influences start in the early/mid 80s. Just listen to 'Blancmanche Blancmanche' and you will find a finite list with acts from the era getting a mention. Usually when Blancmanche enters my ears I tend to move in another direction. This song is everything Blancmanche was not. The 90s enter through bands like Buffalo Tom. The Boston scene of the day certainly made an impression on Avery Plains. Stretching things a little I'd say that Avery Plains is the loud little brother of Blaudzun.

In other words a lot of interesting music has found its way into SoOn. It comes out like on the debut album of Litzberg last year. An enthusiastic, wide sound with layers of electric guitars, hard to reign in, although SoOn does have its more introverted moments. Welcome counter points to the fierce alternative rocking sections.

Avery Plains is a band from Groningen led by Jurgen Veenstra and active since 2011. Since then the band has slimmed from seven and ten members to just four. The foursome is ready to release the second album of the band, after the eponymous debut album in 2015.

The band in my ears manages to capture energy in its music, resulting in extremely loudly played passages. Yet SoOn starts with 'Two Sad Wings', a six minutes plus song that doesn't mind working with dynamics. I'm sure the guitars were on ear splitting level in the studio. The mix is thus that the lead guitar is mixed somewhat in the background pretending not to be that loud. SoOn ends with an alternative ballad, again showing the dynamics the band is capable of.

Yes, a negative comment could be that Avery Plains is showing off its influences too easily. But why should I complain when listening to 'SoOn'? Buffalo Tom is spelled all over the song. When it's this nice I don't care. Tom Janovitz has more or less retired from rock so enter Avery Plains. But granted, the music on SoOn cannot be called original. Also I do not rate it in the top two alternative rock albums of 2020. That slot remains reserved for Porridge Radio and The Beths, so far. SoOn certainly is a runner up and an album I play with lots of pleasure.

Why? Because primarily the songs are good and the energy is there. Following on the heels of the quality of the songs are the arrangements. There are so many nice details woven into the songs showing that the band worked hard in creating the details that adorn its songs. Songs can be loud and have great details. Avery Plains has them galore. It's time for you to check it out. The link's provided below.

To come back to my introductory question, I opt to answer it with no. A lot of Dutch alternative rock bands, at least to my ears, are exceptionally good. SoOn by Avery Plains has been added to that list.

You can listen to and buy SoOn here: