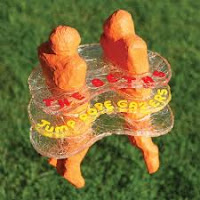 The three songs The Beths released announcing its new album sort of blew me off my chair. The expectations for Jump Rope Gazers were set so high that the album could only disappoint. Did it? Follow me.

The album opens with the song it should open with. The song is totally exciting and in the list of the best alternative rock songs I've heard over the past years. 'I'm Not Getting Excited' it is called none the less. Well, I am and only want to dance and dance while listening. It holds everything. A fast pace, a great melody, fantastic harmonies and a guitar solo that only barely makes it to the other side of the bend, a narrow escape from falling into the deep. An absolute top song.

Listening to Jump Rope Gazers more and more I realise I'm listening to the best album by a woman led band since Veruca Salt's 'Eight Arms To Hold You', my standard in this category of music. Musically there is some similarity, for sure, it is in the harmonies where the same level of proficiency is shared with the world. In the weird little "aah-aah-oooohs" in 'Dying To Believe' e.g. They are a dead giveaway as far as I'm concerned.

The Beths are getting dangerously close to absolute perfection on this album. Without letting go of its alternative rock roots, the pop element that is allowed in makes several songs deliciously bittersweet. A better version of The Bangles, because the pop element does not win.

The Beths are from New Zealand and releases its second full length album after releasing an EP in 2016, 'Warm Blood' and 'Future Me Hates Me' in 2018. The latter did not impress me at the time but probably deserves a re-appraisal as 'Warm Blood' really impressed me when re-released on vinyl in 2019. Elisabeth Stokes and band set a next convincing step with Jump Rope Gazers.

At the same time the band is not afraid to show what it has been listening to recently. 'Acrid' has written Courtney Barnett all over it, including the way of singing and vocal changes. What is added is the uncanny vocal prowess of the band and Elisabeth Stokes. She's vocally all over the song, making it a song Ms. Barnett could be quite jealous of.

The combination of hard alternative rocking and the sweeter, alternative rock ballads makes Jump Rope Gazers diverse and more interesting because of it. There's more to explore and enjoy. In one sense it makes the band seem more like many other women fronted alternative bands. In all others the band is better in many other aspects. The music, the compositions are in at least three quarters of this album simply better than the competition's. A good example is 'Do You Want Me Now'. It is at heart an average song. In most ways it simply progresses. In the harmonies the band has challenged itself, the guitar solo gives it a kick. The result is a ballad very much worthwhile listening to.

With Jump Rope Gazers The Beths has put itself in an exclusive list. The band can challenge Jen Cloher's and Courtney Barnett's last albums easily and leave the rest behind. The best alternative, female fronted rock acts come from Down Under. That much is clear. I can't wait to play the record in my home. Unfortunately it takes a while before that is possible. As if the cd has to be rowed across the Pacific and beyond.

You can listen to and buy Jump Rope Gazers here: