Fun Is Fun, The Trilogy Is Done. Jay Allen and the Archcriminals 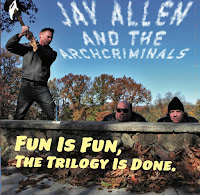 Jay Allen and the Archcriminals debuted on this blog in the new singles series started a few months ago. The full album has been released on Rum Bar Records and it is the musical party the single, 'Little Daggers', promised.

Like all other bands on Rum Bar the three musicians are getting on in life but still have a burning desire to play rock and roll and are able to match that ambition with an uncanny competence when it comes to writing the songs to quench that desire.

Jay Allen and band lend a little here and there where the sound of a specific song is concerned. For a change I'm not going to give examples as it is more fun to find out for yourselves. You will find hints to 60s pop, 70s punkrock and powerpop. A little familiar organ sound or overall mood of a song.

There are eight songs on Fun Is Fun, The Trilogy Is Done. Six of them are of stellar quality. They rock so loud. The opening song is arguable the most poppy of the eight. Emily Grogan helps out on the vocals in 'Cry A Little Tear', the new and great single. She roughs things over a little with a gravelly voice that sounds so good in this context. All over the album producer Rich Edmonston helps out with lead guitar and a piano. Jay Allen sings and plays guitar. Henry Ryan is on bass and Gary Robley and Larry Litigot alternated on drums duties.

If there's one thing in this album that sticks out it is energy. It is oozing out of the record front, top, bottom and sides. Right behind it is the fun of playing these songs. This is what it is all about. Everybody's allowed his and her dreams but Jay Allen knows this album circa 40 years too late, so it is about the fun of playing and sharing that fun with everybody who wants to hear it. And here I am on the other side of the Atlantic spreading the news to all who want to read about it, for the fun of writing about great music. Like Fun Is Fun is. There's not one lover of punky rock music that ought to miss out on this album. This is your thing, I promise.

The band does not shy away from a sped up countryrock song. Slow down 'I'll Be Damned' and any hat act can play it as if it belonged to it. Don't be fooled, this is the real thing. A little Irish folk is no stranger to the band either. Many songs would do well in an Irish pub filled with rock and roll fans. Take a swig of Guinness before waving that pint above the head again while shouting "over and over and over again". Throw in another dime into the jukebox and play it again, please.

The album is over before you know it, with only one, obvious, remedy. Put it on again and start playing that beautiful rock ballad 'Cry A Little Tear' again. "There was a time I felt so sad and lonely", are nearly identical to the first line of that huge Aerosmith hit 'Cryin'. What follows is a great melody, great harmonies and that rough ending to the song. What a song! This ought to be a huge hit as well. Before you know it that previous single comes by inclding that fine organ, 'Little Daggers', and the album is already beyond the point where a Jay Allen and the Archangels fan can turn the album off. Listening is becoming a fan, guaranteed.

You can listen to and buy Fun Is Fun, The Trilogy Is Done here: